President Roosevelt and the New Deal 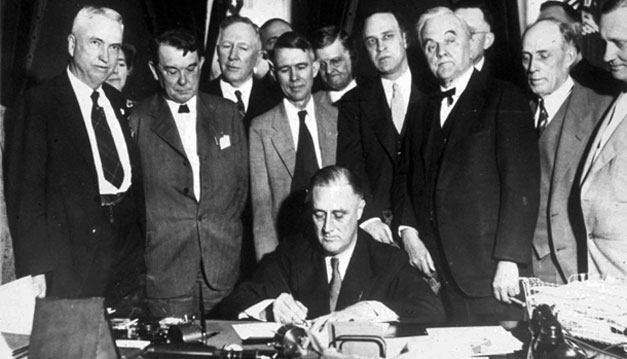 The New Deal was a series of programs and projects instituted during the Great Depression by President Franklin D. Roosevelt that aimed to restore prosperity to Americans. When Roosevelt took office in 1933, he acted swiftly to stabilize the economy and provide jobs and relief to those who were suffering. Over the next eight years, the government instituted a series of experimental New Deal projects and programs, such as the CCC, the WPA, the TVA, the SEC and others. Roosevelt’s New Deal fundamentally and permanently changed the U.S. federal government by expanding its size and scope—especially its role in the economy.

New Deal for the American People

“First of all,” he said, “let me assert my firm belief that the only thing we have to fear is fear itself.”

He promised that he would act swiftly to face the “dark realities of the moment” and assured Americans that he would “wage a war against the emergency” just as though “we were in fact invaded by a foreign foe.” His speech gave many people confidence that they’d elected a man who was not afraid to take bold steps to solve the nation’s problems.

The next day, Roosevelt declared a four-day bank holiday to stop people from withdrawing their money from shaky banks. On March 9, Congress passed Roosevelt’s Emergency Banking Act, which reorganized the banks and closed the ones that were insolvent.

In his first “fireside chat” three days later, the president urged Americans to put their savings back in the banks, and by the end of the month almost three quarters of them had reopened.

Roosevelt’s quest to end the Great Depression was just beginning, and would ramp up in what came to be known as “The First 100 Days.” Roosevelt kicked things off by asking Congress to take the first step toward ending Prohibition—one of the more divisive issues of the 1920s—by making it legal once again for Americans to buy beer. (At the end of the year, Congress ratified the 21st Amendment and ended Prohibition for good.)

In May, he signed the Tennessee Valley Authority Act into law, creating the TVA and enabling the federal government to build dams along the Tennessee River that controlled flooding and generated inexpensive hydroelectric power for the people in the region.

That same month, Congress passed a bill that paid commodity farmers (farmers who produced things like wheat, dairy products, tobacco and corn) to leave their fields fallow in order to end agricultural surpluses and boost prices.

June’s National Industrial Recovery Act guaranteed that workers would have the right to unionize and bargain collectively for higher wages and better working conditions; it also suspended some antitrust laws and established a federally funded Public Works Administration.

In addition to the Agricultural Adjustment Act, the Tennessee Valley Authority Act and the National Industrial Recovery Act, Roosevelt had won passage of 12 other major laws, including the Glass-Steagall Act (an important banking bill) and the Home Owners’ Loan Act, in his first 100 days in office.

Almost every American found something to be pleased about and something to complain about in this motley collection of bills, but it was clear to all that FDR was taking the “direct, vigorous” action that he’d promised in his inaugural address.

Despite the best efforts of President Roosevelt and his cabinet, however, the Great Depression continued. Unemployment persisted, the economy remained unstable, farmers continued to struggle in the Dust Bowl and people grew angrier and more desperate.

So, in the spring of 1935, Roosevelt launched a second, more aggressive series of federal programs, sometimes called the Second New Deal.

In April, he created the Works Progress Administration (WPA) to provide jobs for unemployed people. WPA projects weren’t allowed to compete with private industry, so they focused on building things like post offices, bridges, schools, highways and parks. The WPA also gave work to artists, writers, theater directors and musicians.

In July 1935, the National Labor Relations Act, also known as the Wagner Act, created the National Labor Relations Board to supervise union elections and prevent businesses from treating their workers unfairly. In August, FDR signed the Social Security Act of 1935, which guaranteed pensions to millions of Americans, set up a system of unemployment insurance and stipulated that the federal government would help care for dependent children and the disabled.

In 1936, while campaigning for a second term, FDR told a roaring crowd at Madison Square Garden that “The forces of ‘organized money’ are unanimous in their hate for me—and I welcome their hatred.”

This FDR had come a long way from his earlier repudiation of class-based politics and was promising a much more aggressive fight against the people who were profiting from the Depression-era troubles of ordinary Americans. He won the election by a landslide.

Still, the Great Depression dragged on. Workers grew more militant: In December 1936, for example, the United Auto Workers strike at a GM plant in Flint, Michigan lasted for 44 days and spread to some 150,000 autoworkers in 35 cities.

By 1937, to the dismay of most corporate leaders, some 8 million workers had joined unions and were loudly demanding their rights.

The End of the New Deal?

Meanwhile, the New Deal itself confronted one political setback after another. Arguing that they represented an unconstitutional extension of federal authority, the conservative majority on the Supreme Court had already invalidated reform initiatives like the National Recovery Administration and the Agricultural Adjustment Administration.

In order to protect his programs from further meddling, in 1937 President Roosevelt announced a plan to add enough liberal justices to the Court to neutralize the “obstructionist” conservatives.

This “Court-packing” turned out to be unnecessary—soon after they caught wind of the plan, the conservative justices started voting to uphold New Deal projects—but the episode did a good deal of public-relations damage to the administration and gave ammunition to many of the president’s Congressional opponents.

That same year, the economy slipped back into a recession when the government reduced its stimulus spending. Despite this seeming vindication of New Deal policies, increasing anti-Roosevelt sentiment made it difficult for him to enact any new programs.

On December 7, 1941, the Japanese bombed Pearl Harbor and the United States entered World War II. The war effort stimulated American industry and, as a result, effectively ended the Great Depression.

The New Deal and American Politics

They created a brand-new, if tenuous, political coalition that included white working people, African Americans and left-wing intellectuals. More women entered the workforce as Roosevelt expanded the number of secretarial roles in government. These groups rarely shared the same interests—at least, they rarely thought they did— but they did share a powerful belief that an interventionist government was good for their families, the economy and the nation.

Their coalition has splintered over time, but many of the New Deal programs that bound them together—Social Security, unemployment insurance and federal agricultural subsidies, for instance—are still with us today.