Consumer trust in forms of advertisement 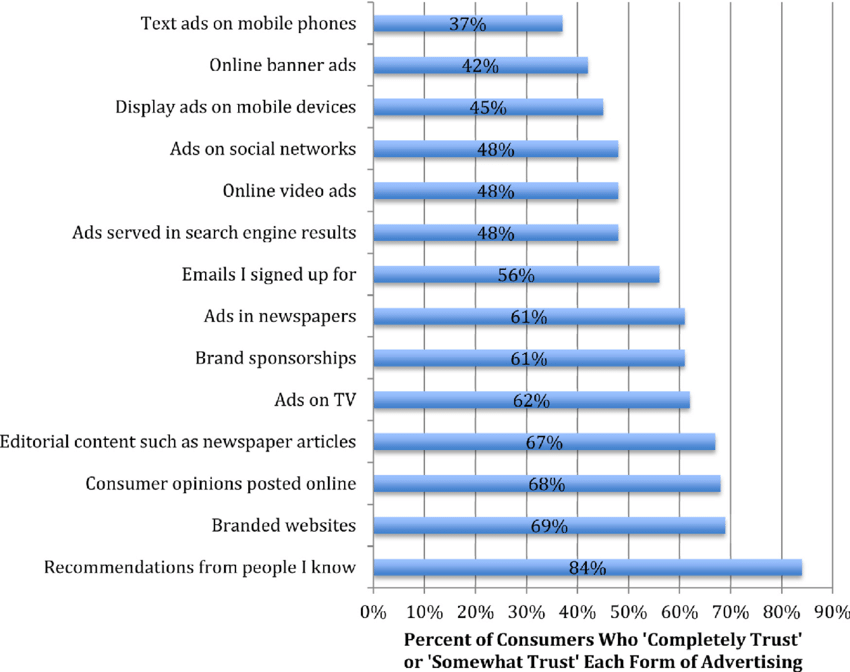 A recent study of consumers surfaced just how much trust has emerged as a top priority for brands. Among consumers today, “70 percent say trusting a brand is more important today than in the past — a shared belief among age groups, gender and income.” While over half (53%) agree that whether you trust the company behind the brand or product is the second most important factor (only to price) when purchasing from a new brand.

There’s no exact recipe for becoming a trustworthy brand, but as we’ve seen throughout the events of the past year, consumers have come to give their trust to brands that demonstrate a positive impact on societal issues; provide content that’s accurate, reliable and unbiased; and show responsibility for protecting user data.

Whether it’s advertising via old standbys like TV, newspapers and radio or newer media like mobile and online, earning consumer trust is the holy grail of a successful campaign. The good news for advertisers is that consumers around the globe are more trusting now than they were several years ago. In fact, the study reveals that trust in online advertising is increasing, as is trust in ads on TV, radio and movie screens.

Word-of-mouth recommendations from friends and family, often referred to as earned advertising, are still the most influential, as 84 percent of global respondents across 58 countries to the Nielsen online survey said this source was the most trustworthy. Trust in advertising on branded websites increased 9 percentage points to 69 percent in 2013 as the second most trusted format, a jump from fourth-place ranking in 2007. Sixty-eight percent of survey respondents indicated that they trust consumer opinions posted online, which ranked third in 2013, up 7 percentage points from 2007.

“Brand marketers should be especially encouraged to find owned advertising among the most trusted marketing formats,” said Randall Beard, global head, Advertiser Solutions at Nielsen. “This form of advertising is trusted by nearly 70 percent of consumers globally, which emphasizes the notion that marketers maintain the ability to control the messages about their brands in a way that consumers consider credible. This perceived credibility is a key component in advertising effectiveness.”

In addition to an increase in trust in messages on branded websites, more than half (56%) of respondents said they trust consumer-consented email messages, an increase of 7 percentage points since 2007.

For other online advertising, almost half (48%) said they trust ads in search engine results, online video ads and ads on social networks. More than four in 10 (42%) trust online banner ads, up from 26 percent in 2007. This is good news for advertisers, who spent 26 percent more on this form of advertising in the first quarter of this year. Forty-five percent of respondents in Nielsen’s 2013 survey believed display ads on mobile phones were credible, and 37 percent trusted text ads on mobile phones, up from 18 percent in 2007.

Ads on television, in newspapers and in magazines continue to be among the most trusted forms of paid advertising. Trust in television ads increased from 56 percent in 2007 to 62 percent in 2013. Six-in-10 respondents trusted ads in magazines, a rise of 4 percentage points from 2007. Newspaper ads were the only format to decline in the six-year period—61 percent of respondents found newspaper ads credible in 2013, down from 63 percent in 2007. Although global ad spend grew only a marginal 1.9 percent in the first quarter of 2013, traditional paid media continues to own the majority share of spend, with TV in the top spot owning 59 percent.

Ads on radio (57%) and before movies (56%) both gained consumer trust as well, reporting increases of 3 and 18 percentage points, respectively, since 2007. Trust in brand sponsorships (61%) increased 12 percentage points from 2007.

“While TV remains the front-running format for the delivery of marketing messages based on ad spend, consumers globally are also looking to online media to get information about brands,” said Beard. “On the flipside, earned advertising channels have empowered consumers to advocate for their favorite brands, something that shouldn’t go unnoticed by brand advertisers.”