Sexual Assault on Campus: A Problem to Be Dealt With

Regardless of the progress that society has reached in the 21st century, there are still a lot of issues the society is suffering from. Thousands of students are forced to deal with the problem of sexual assault on campuses throughout the United States. The latest survey shows that 19% of all sexual contacts on American college campuses were not precedented by consent from both parties. This is a huge percentage of forced sexual assaults we are talking about. American students are being raped, and this issue has to be dealt with as soon as possible. Unfortunately, it is not that easy because the very victims of the assaults are afraid of reporting them, fearing the social stigma that such a report might entail for them. In this article, we are going to talk about actions to take in resolving this obnoxious problem.

What Is Sexual Assault?

The first thing that you have to do before embarking upon the process of resolving any problem is defining what the problem actually is. When talking about sexual assault, there are no exceptions out of the general rule. Hence, the commonly-accepted term for sexual assault is:

An act of sexual assault may refer to sexual contact or any kind of sexual behaviour that occurs on a non-consensual basis. In cases of sexual assault, there is a victim and an offender or a group of offenders. The sexual assault might intervene in many forms, including attempted rape, sexual touching, forced oral sex, etc.

Unfortunately, due to the lack of information on sexual assault, American students are not able to report on the cases of sexual harassment because they might not even know or recognize the fact that they have become the victims of it. Sexual misconduct can take many forms, and there is a need to tackle the issue without further ado.

Why and How Often?

A non-consensual sexual contact is not something that happens out of the blue on campuses all around the United States. What is more, the ultimate myth that only women can become victims of sexual violence is nowadays being erased by the neoteric reality of college life. In accordance with the latest statistic, only 26% of women report having been raped or sexually assaulted. Also, 23% of the representatives of the LGBTQ community have reported on the acts of sexual violence against them. Finally, only 7% of men do not fear to report about becoming the victims of sexual crimes. The percentage of those who are simply afraid to speak up is huge, and there is no corresponding reaction from the government that would ensure that people have somewhere to go, not even after but prior to becoming the victims of sexual assault.

Those, who think that the problem does not exist in a manner it is being portrayed by the media, should, probably, know that in accordance with the latest report by the Rape, Abuse, and Incest National Network (RAINN), 11,2% of all American students of the last ten years have been the victims of sexual assault of various forms, ranging from forced rape to undesired touching. What is more, the very same report indicates that nearly 5% of all American students have been stalked over the course of the last ten years.

Finally, one’s affiliation to campus boosts a person’s jeopardy of becoming a victim of sexual crime. RAINN claims that male and female college students aged between 18-24 are 78% and 20%, respectively, more likely to fall the victims of sexual assault of any kind or even rape. So, the question is, why is there nothing being done about it?

There is no basis for perception for such people in the society, and this is why the problem is still so acute in modern America. How can the law enforcement agencies deal with the problem if they are not even told about the causes of its emergence? Impunity breeds crime: and this is the principle that needs to be taken into consideration when dealing with the issue.

Ways to Protect Yourself and Prevent Assault

You might have expected reading here about karate sessions and taekwondo training sessions, but no. The point to be made is that you are not supposed to defend yourself because the problem needs to be attacked at its very core. You are not supposed to even bother about being attacked or sexually harassed by someone else. Therefore, it is all about prevention: 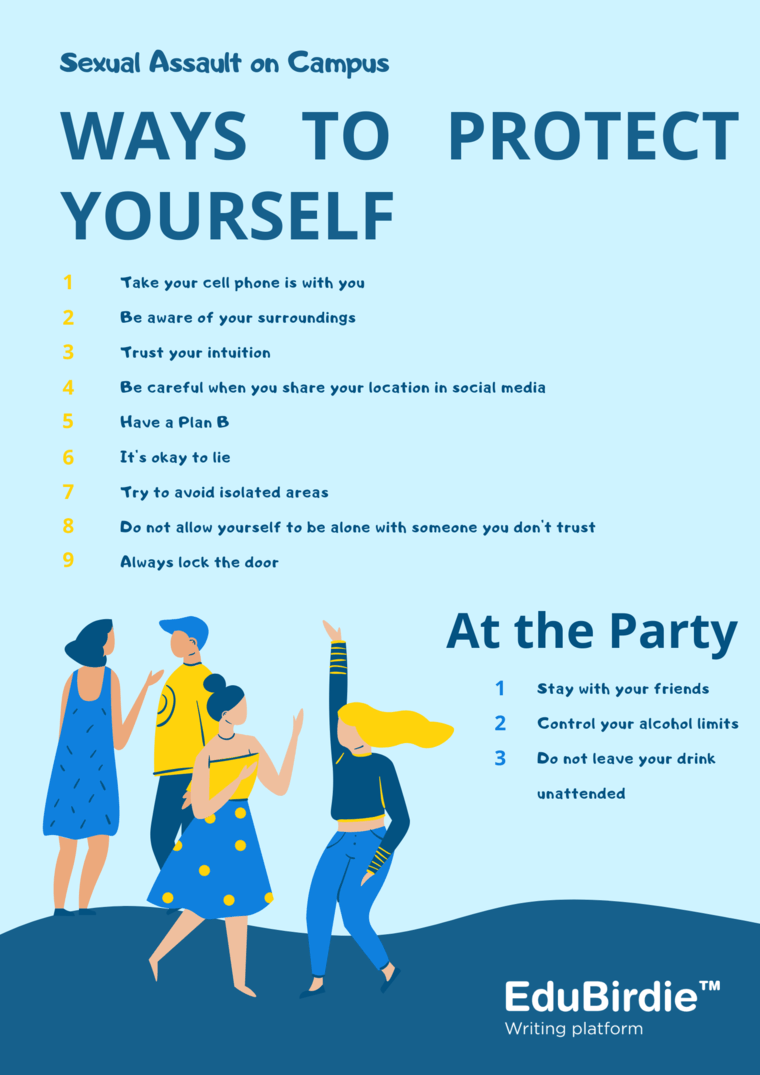 How to Deal with Being a Victim of Sexual Assault?

If the terrible thing happened, and you have been raped or sexually abused, there is no time to wait. You have to act promptly and decisively.

It seems fair to claim that the reason why sexual assault is “blossoming” on campuses all around America is clear enough to see. The students are afraid to report on it because there are no corresponding social and psychological programs that would help them deal with the aftermath of such a decision. Young people are extremely violent, and a woman who would report a case of, for example, rape might not be ready to accept the consequences of confession. Such communities as LGBTQ may deal with additional pressure from their community side. For some men, it is simply unacceptable to acknowledge that they have fallen the victims of sexual crime.

How to Feel Safe After an Assault?

I might surely seem hard to overcome the trauma of a sexual assault but there is actually a couple of things that you might embark upon in order to feel safe afterwards:

Advice for Support a Survivor of Sexual Assault

It is a fact that being a close person of a victim of sexual assault might be equally hard to be the victim him or herself. However, the first thing for you to do in situations like this is to understand the fact that you are the only support those people have at the very first stages of getting over the issue. Your task as a friend, parent, teacher, boyfriend, girlfriend, etc. is to encourage the victim to report the crime. Silencing a crime down has never helped any victim to get over it. Nonetheless, you should not blow the whistle until the victim approves you to do so. Showing them that they are not alone is surely the best thing to do.

The most important is to get heard and receive professional help! You should also explore the ways to help other victims as it will help you heal as well. You may think about some research paper service that will help you start with a project or compose a proposal on how to help sexual harassment victims stay safe.

Fortunately, the country is moving in the right direction when it comes to talking about the aftermath of sexual assault. There is a number of resources that you can reach out to and get all the support that you need. There are people who will understand your situation and help you deal with it. Hence, if you have fallen a victim of any kind of sexual assault, do not be afraid to contact:

This is the largest organization in the United States to be addressed when it comes to dealing with any kind of abuse, harassment or attack.

Despite being located at the University of Utah, the organization takes action on sexual assault victims nationwide.

The National Center for Victims of Crime

Regardless of the kind of crime that you have become a victim of, you can contact this organization 24/7 in order to get legal and psychological help.

This service has been created by the Stop Street Harassment Organization and is operated by RAINN. One of their most outstanding features is that they have a 24/7 hotline which you can write to and get some help if you feel like making a call can be dangerous or revealing.

This is the organization is the first instance if you witnessed a sexual assault or became a victim yourself. Remember, reporting a crime is the best way of fighting it.

This is an online-based helpline for youths who feel like being intimidated by their date. Also, people in abusive relationships shall contact the website when in need of legal or psychological help.

As a student, you might be travelling a lot, or you might stop by a campus somewhere in the United States. This organization makes sure that you stay safe in your new surroundings when it comes to protecting you from the horrible aftermath of being a victim of sexual assault.

Stalking is the first symptom of a maniac. Make sure that you report stalking because the sooner you do it, the fewer people get abused.

Unfortunately, the LGBTQ members are often discriminated and therefore attacked by the radicals. Sexual assault often becomes a pivotal way of expressing hatred towards these people. This organization functions as one of the pivotal shields that the LGBTQ people can use in order to protect themselves.

Also, there must be a special board designated to deal with the corresponding issues at your college or university, make sure to reach out to them as well.

Do not be silent! Speak it up! Nobody is going to blame you for defending your own rights and your own dignity! There is a need for you to understand that there is nothing wrong if you cannot manage to deal with a sexual assault. The pivotal strike that you can impose upon the perpetrator is to let him or her know that you have not been broken mentally and psychologically. Report the crime as soon as it happens and stay proud of the fact that you are not afraid to bring it to the public. Remember, by doing this, you are not only defending yourself, but you are also preventing such crimes from happening to other innocent people.