As the news reports nationwide discuss global warming issues, air pollution, and other environmental challenges, little is said about proper school waste management. According to statistics, as an average American school child discards school lunch packages, it results in about 67 pounds of waste annually! Whether it is a lack of stricter laws or people’s ignorance, it remains a topic of constant social debates. In this particular field, environmental damage happens due to lack of well-coordinated actions and frequent ignorant attitude among schoolchildren. As global issues are addressed, it is crucial to consider meaningful environmental education initiatives that focus on school children’s participation. The aim should be not only to educate about not leaving litter in the classroom or in the schoolyard but to create efficient concepts based on existing school projects. 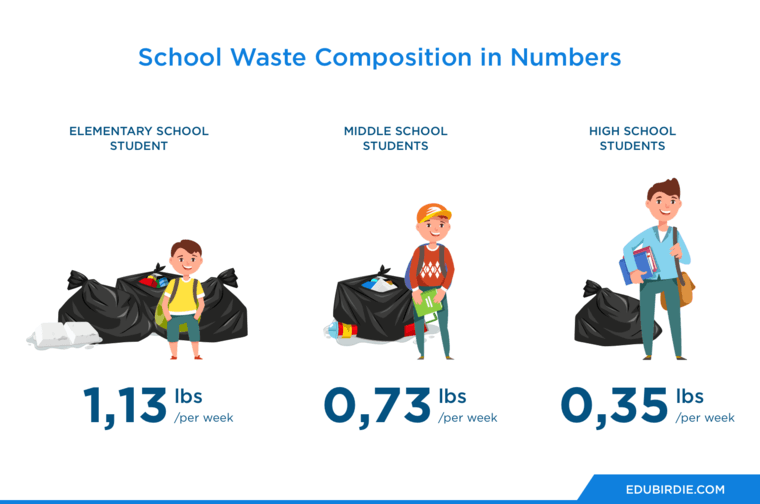 Majority of schools in the United States implement several waste management processes, including separation, reducing, reusing, and recycling. A major concern is finding the least negative solution where both children and adults can participate. Still, what is school waste made of and where does it come from? Firstly, school waste composition will differ in each case as there are diverse materials that an average school discards. Depending on rules, there is specific trash composition along with implemented recycling schemes. Assuming that the availability of information related to waste management in schools may not be immediately available upon request, it shows how important it is to research existing statistics and conduct analysis on school waste composition.

An interesting fact that instantly brings justified concerns is that almost 80 percent of the entire waste generated by an average American school could be recycled or composted. Just think of paper, lunch boxes, food waste, litter is thrown around during playground games, school laboratory used objects left after the science classes to see the most obvious suspects. While there may be legislation barriers, lack of coordination and knowledge, environmental protection should overcome any limitations. As Jimmy Carter said, “like music and art, love of nature is a common language that can transcend political or social boundaries.”

Where Does it All Come From?

Analyzing the contents of a solid waste stream, it is revealed that a significant part of trash is generated by businesses and institutions like schools. Majority of the waste composition relates to paper products and food waste. Statistics show that discarded school lunch packages and food leftovers constitute about 18,76 pounds of lunch waste per average elementary school in the United States.

Diverse statistics across the United States show that organics constitute about 50 percent of total waste with paper making it to the second place with about 30 percent, followed by plastic. Most schools turn to waste management audits in order to identify characteristics of personal school waste stream. As an example, research shows that over one-third of the waste generated by California schools are made up mostly of single-use paper. As is almost always the case, organics constitute about half of the total waste, which brings serious concerns regarding food waste initiatives. As the U.S. Department of Agriculture reports, Americans waste enough food every day to fill a 90,000 seat football stadium. The same research shows that food wasted by school children is no different from the rest of the American population.

According to the USDA's estimates, food loss at the retail and consumer levels remains at 31%. These numbers correspond to about 133 billion pounds or 161 billion dollars worth in 2010 alone. With over 55 million children enrolled nationwide, food waste remains a serious issue along with paper recycling and plastic waste.

Since each school in the United States has a different number of students with custom rules regarding cafeteria, use of paper, and personal recycling practices, among other variables, the only reliable way to work with numbers is researching particular schools or entire US states. Turning to research provided by the Vermont Agency of Natural Resources, estimates for elementary and middle school students are higher than 5lbs of waste per week for an average student. The frequency of breakfasts, changes in the National School Lunch program, and lunch periods should be considered when evaluating statistical numbers.

In practice, if taking samples of elementary students with 1.13 lbs average for a student per week, 1,770 elementary school students will represent 2,000 lbs per week, equaling to one ton of food waste weekly. Likewise, with middle school students of 0,73 lbs per week for one student, we receive 1 ton of food wasted with 2,740 students. Finally, with 5,175 high school students, and even lesser 0,35 lbs per person, we have 1 ton of weekly food waste again. With mostly similar figures, organic waste constitutes about 50 percent of total school waste.

As an average school waste statistics graph shows, second place is taken by paper, which is not only made of single-use classroom accessories. It also includes diverse school supplies, which are purchased at the start of each school year without proper check for already available items, still in good condition. Waste statistics in numbers play a crucial role in waste analysis and identification of major flaws in school recycling challenges. With the correct implementation of acquired data, schools can use statistics to see the efficiency of current waste management practices.

Turning to social media and television for reports on environmental issues, there is an abundance of information on global warming and the greenhouse effect. Even though there are laws, future plans, and political talk taking place on food waste and pollution, little is being done about school management waste. As USDA joined the U.S. Environmental Protection Agency with an aim to cut out America's food waste by 50 percent by the year 2030, America’s school system still does not implement unified standards. Existing laws on the topic frequently bring more damage than profit due to legal limitations. An example of such case is USDA’s “Healthy, Hunger Kids Act” mandate. In practice, it only increased school food amounts tossed to the trash bins.

On the other side, there are political figures like California’s Jerry Brown who signed AB1219 law. It helped attract educators and school children to local food donation centers. The other states across America have turned to share tables and special school accessories shops to control school waste amounts. Still, the government does not see school waste management as a national problem. While there are projects like the U.S. Food Waste Challenge, it is still insufficient and does not address school environmental policies. Due to lack of universal school waste management laws, each school becomes an isolated unit. That is why it is important not only to engage children in environmental programs, but also to develop universal laws that will help figh the waste.