Zodiac Signs of the Rich and Famous 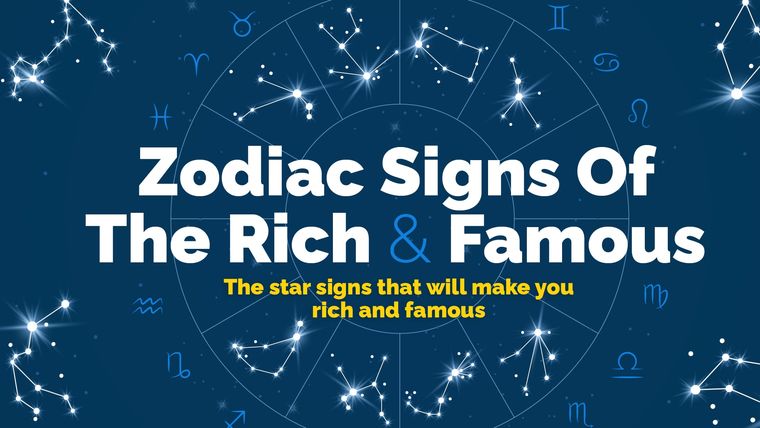 The star signs that will make you rich and famous

The time of year that we’re born can have all sorts of implications for our lives.The zodiac sign that we’re born under is said to impact our personalities, making us better at some things and worse at others. Whether you need help with writing essays or struggle with your finances, or if you excel at creative pursuits or sports, some might say that your star sign is behind it.

This made us wonder what star signs some of the most successful people in the world fall under. Are some star signs better for musicians? And do others produce more actors? We’ve conducted research into the stars of many famous people from a range of different industry backgrounds to find out.

So, do star signs impact your chance to become successful? And what does your zodiac sign mean for you?

These Zodiac Signs are most likely to be famous

Having looked at hundreds of famous names from a range of industries and backgrounds including actors, directors, sportspeople, politicians and business leaders, we’ve found out each person’s zodiac sign. Here are the overall results. 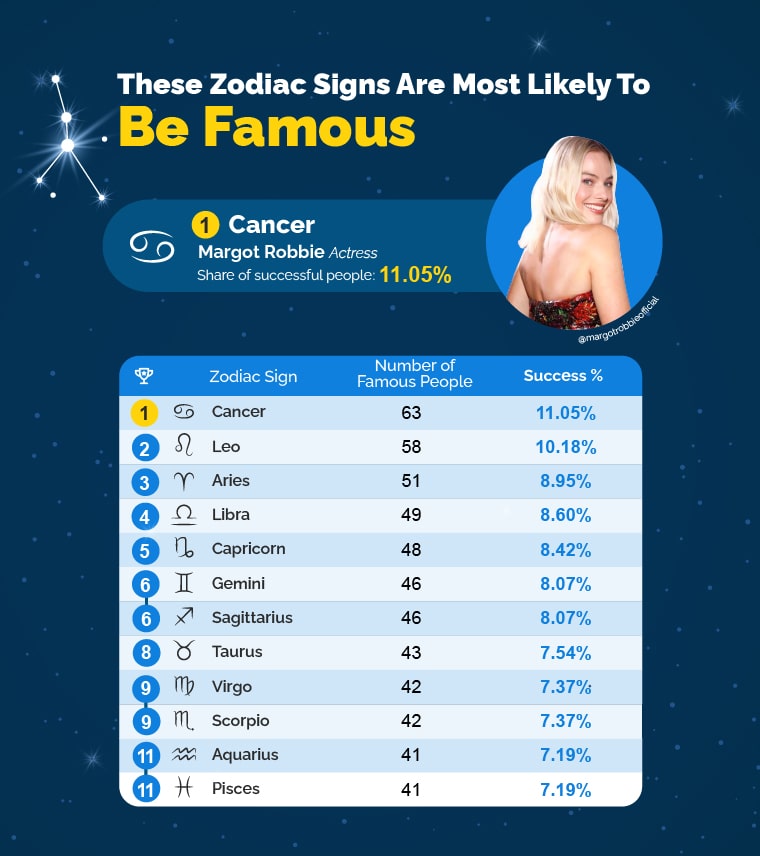 Now we can split the data by occupation, to find out which star signs are the most suitable for different career paths. Here you can see which zodiac signs are most common among famous and accomplished actors. 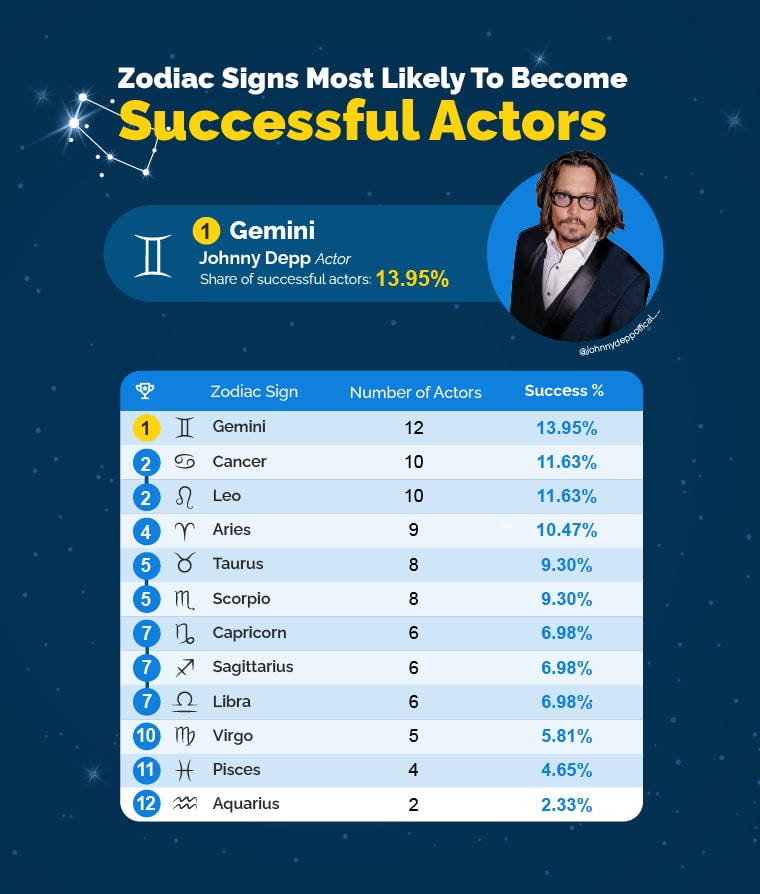 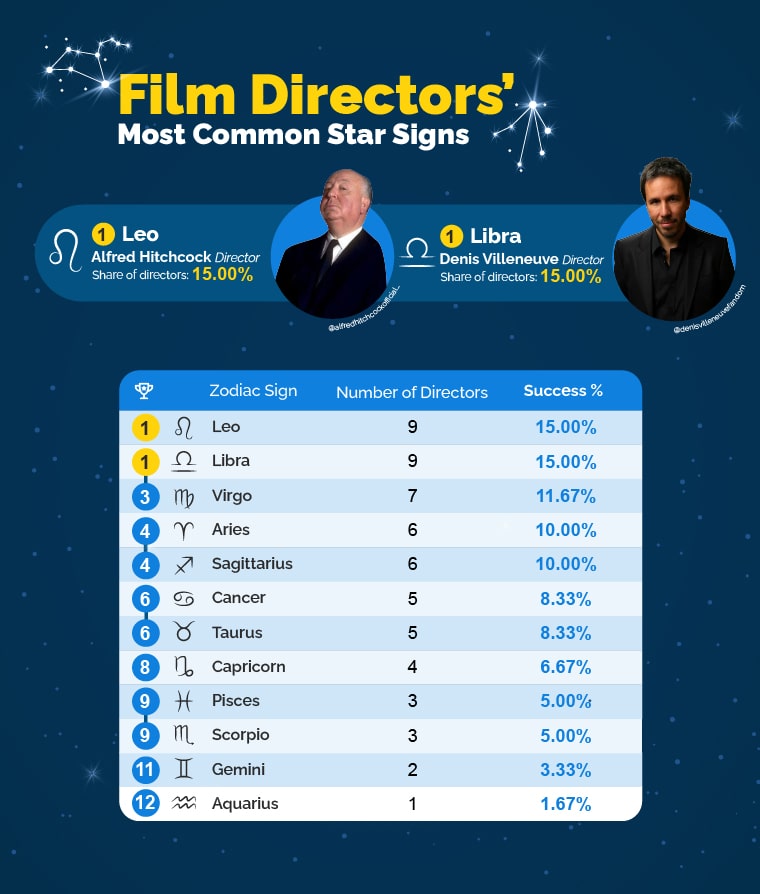 Having looked at people who appear on the big screen, it only made sense to then look at individuals on the other side of the camera. Here you can see which star signs have the most affinity with being a director.

Zodiac signs most likely to be famous musicians 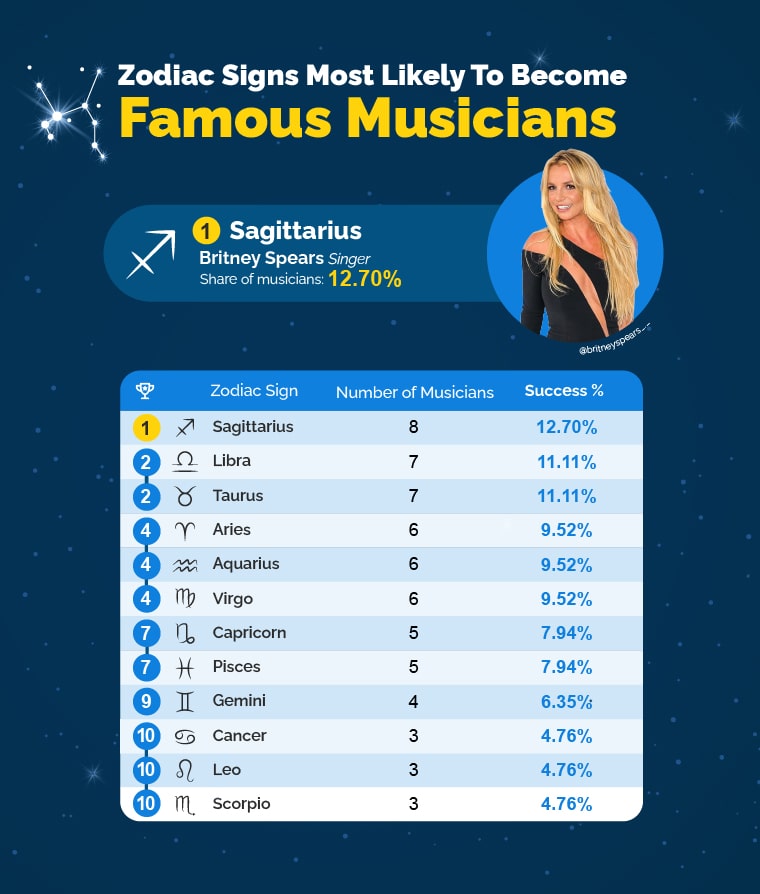 These star signs are the most common to find among the most famous and successful musicians. Were you born under a musical zodiac sign?

Your success as a comedian could also be determined by your zodiac sign, so we’ve done some research to discover the funniest star sign out there. 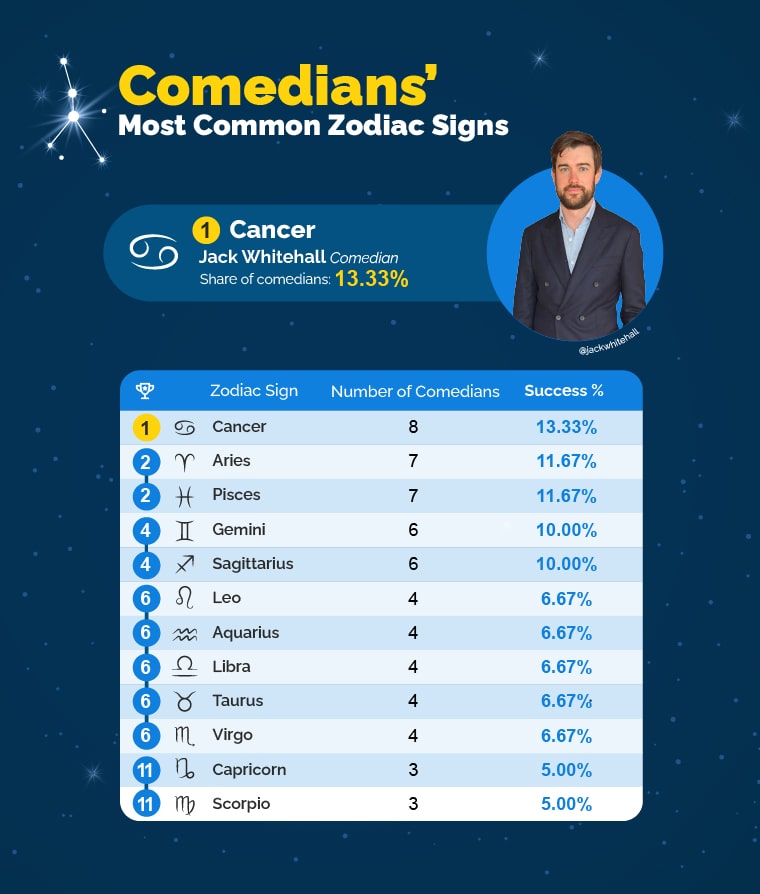 Which star signs are the most fortuitous to be born under if you aspire to a career in sport? Find out here! 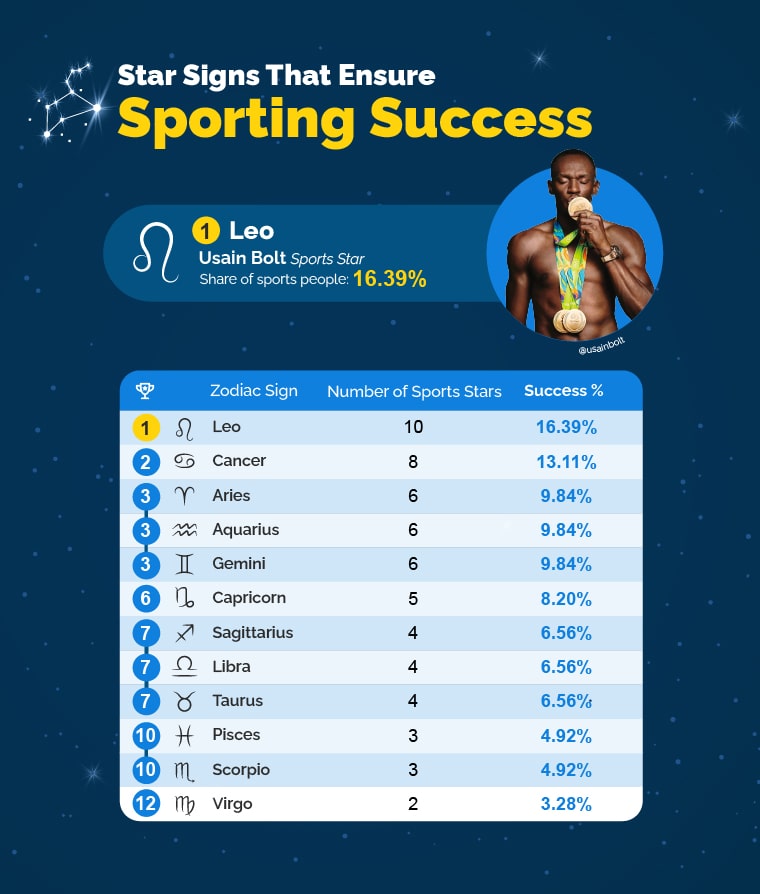 The most artistic zodiac signs

Artistic talent is often linked to zodiac signs and astrology, so which signs will top the table here? 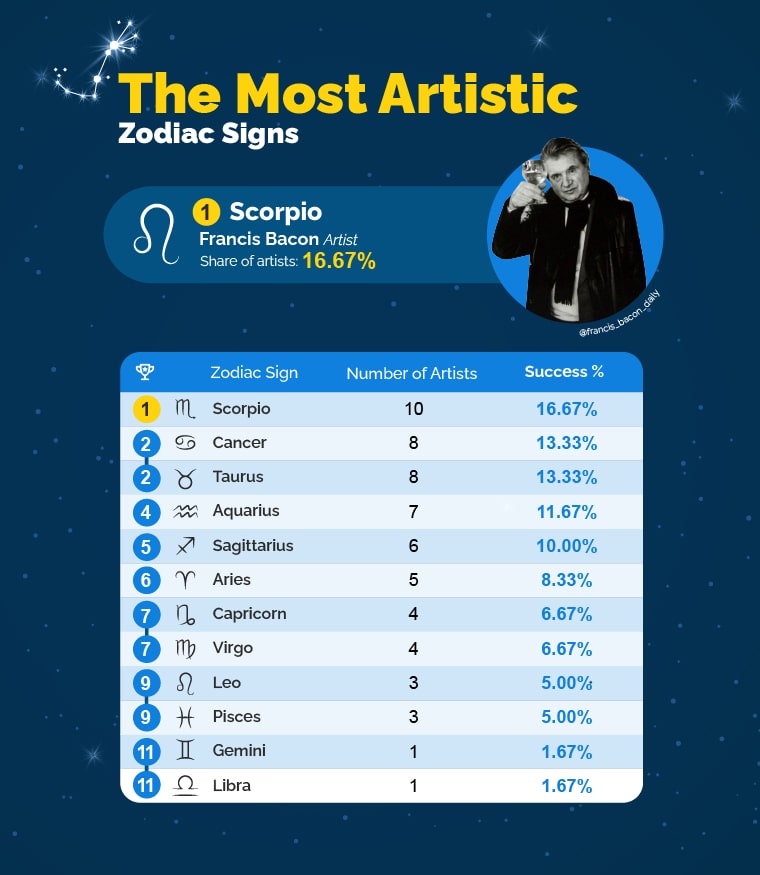 Here we can see which zodiac signs most authors are born under. If your birthday falls under one of these signs, maybe you should give writing a go! 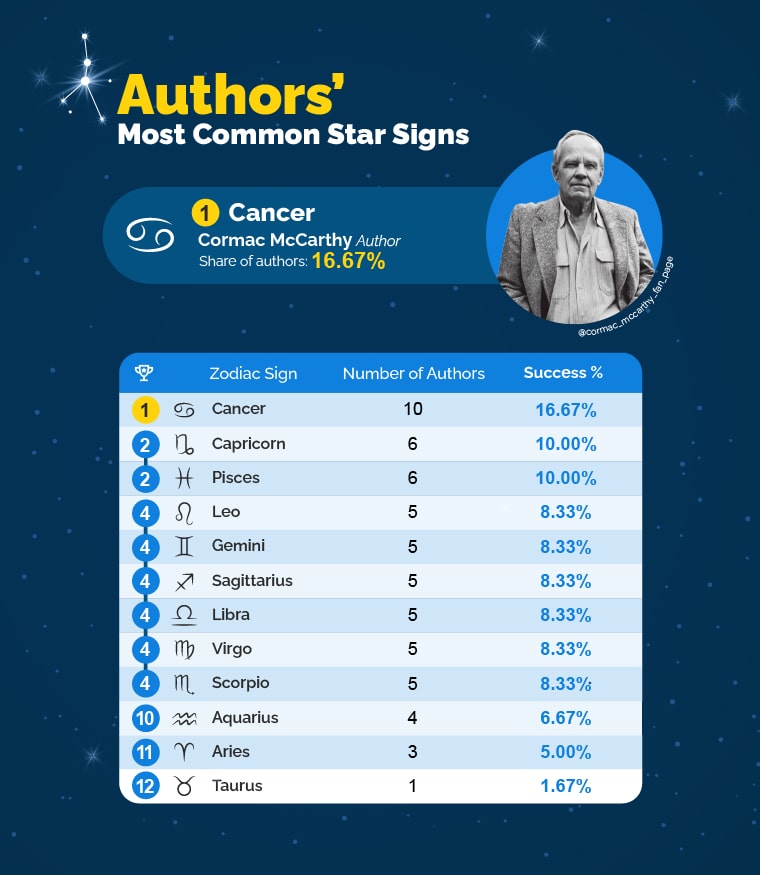 The most popular star signs in politics

As everyone is born under a star sign, even politics could be influenced by the signs of the zodiac. Here we look at which prominent politicians were born under the various signs to see which are the best for a political career. 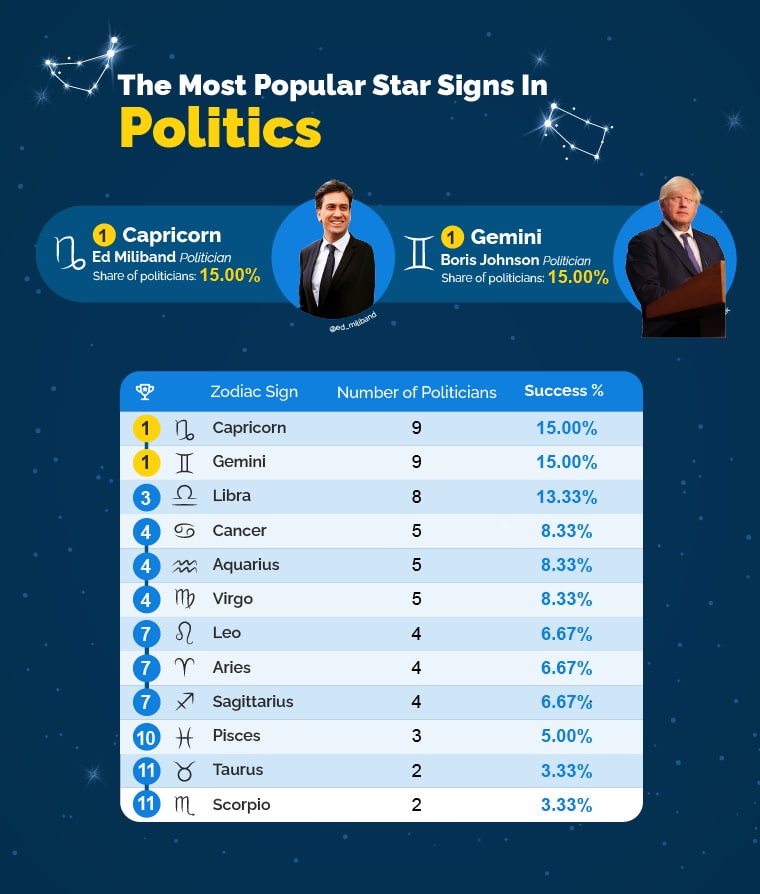 The biggest star signs in business

Last of all, we look at the world of business to see which star sign some of the world’s most successful entrepreneurs and business leaders were born under. 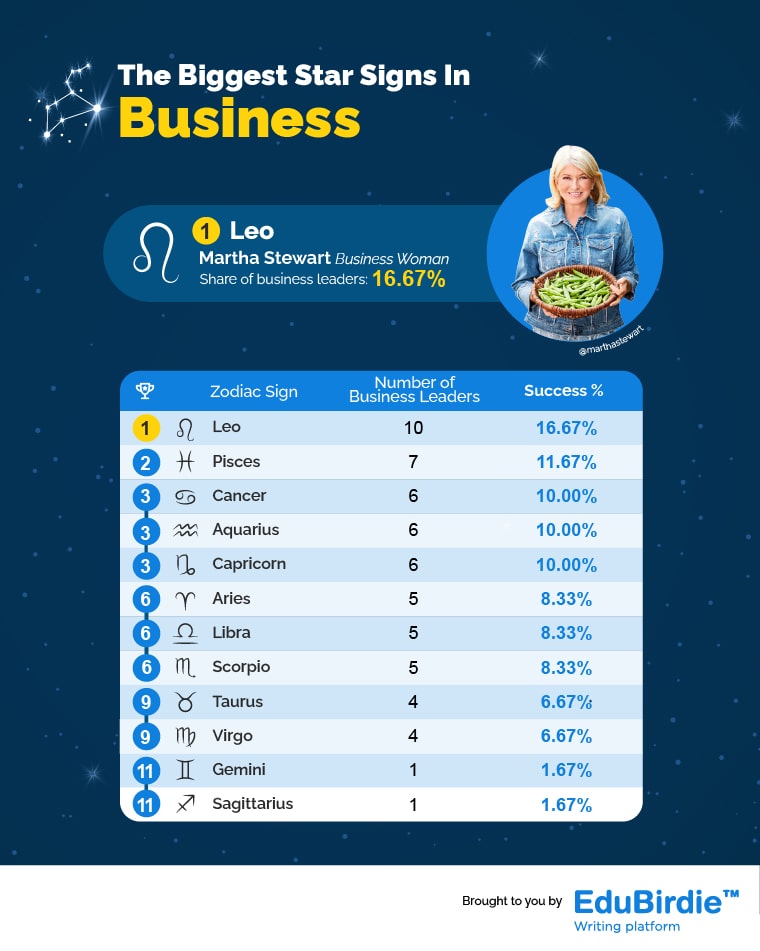 We wanted to find out which star signs are the most common for success in different industries. To do this, we first gathered lists of successful people from a range of backgrounds, noting their industry and date of birth. We gathered data for at least 60 people from each industry that we looked into, and then counted the number of people who were born under each star sign.