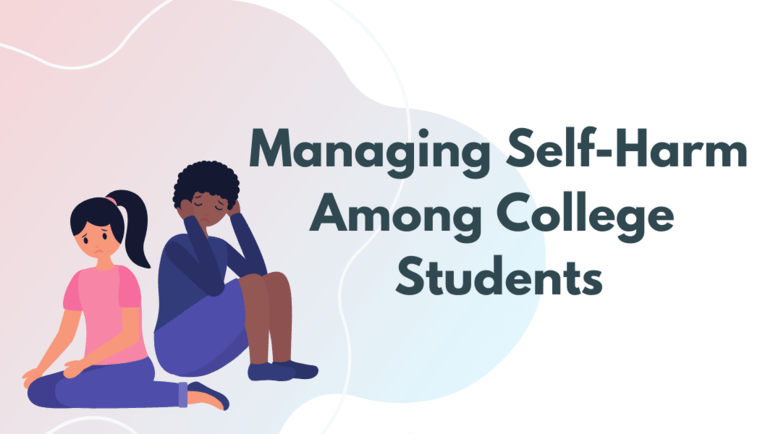 The talks about mental health and wellbeing, which evolved not so long ago, have a definite worrisome reason. The modern pace of life with its unpredictability and constant transformation towards individualization often becomes overwhelming for the most vulnerable part of society - students. The statistics say that about 15% of college students report engaging in self-harm. Why do young people use such a way to cope with negative emotions and how to help them get out of a dangerous psychological state?

Basically, self-harm is a common term for non-suicidal self-injury (NSSI), which encompasses a wide range of actions aiming at partial damaging of a body but not at killing it. NSSI is a way people try to manage their emotions and negative states. Self-harm is not classified as a mental illness but it may result in one.

Although cutting is the most widespread method of self-harm, there are quite a number of others, including self punching, poisoning, overeating, overexercising, intention to get into fights to be beaten, reckless driving, or exposing oneself to situations with obvious health risks. Not having enough information about all the faces self-harm may take often decreases the level of attention where it should be put on alert.

How to Distinguish Self-Harm Signs?

NSSI is a tricky state, which can be easily mistaken with other widespread mental states like common fatigue, anxiety, or just unwillingness to communicate with an outer world for some time. Such states may happen quite often to any of us. But keeping in mind the following signs you can at least try to help people around.

Each of us has scars. But normally, none of them is a secret and can be easily explained. In case of NSSI, people react abnormally while trying to explain the origin of their scars or simply avoid any explanations. Self-harm scars tend to look the same and appear either in the same place or all over the body. Young people with NSSI disorder tend to use a single object to make cuts, scratches, etc.

Pocket knives, box cutters, or thumbtacks don’t usually provoke questions. This method of distinguishing self-harm can’t be reliable on its own but if there’s an evident connection between the object and the above-mentioned scars, it’s worth worrying about.

This applies to cases when a person avoids wearing clothes that might expose certain parts of the skin. Boiling-hot weather, pool day, beach party, or a simple day at home - if a person flatly refuses to consider clothes with shorter sleeves in situations that imply wearing something light and breathing it’s a signal to serious thoughts.

For a substantial part of human beings impulsiveness is a part of the character which doesn’t imply harming anyone including themselves. But for people practicing self-harm, impulsiveness is an impetus and the main reason for intentional injuries. The sudden and strong flow of out-of-control emotions results in desperate attempts to calm them down.

If a person constantly transmits negative emotions and it’s obvious that they are sincere, it’s a massive alarm. No words can appear without previous negative thinking and suffering from the respective type of emotions. However, it’s quite rare for people to share what they really think and feel so negative vibing is more about the gut feeling than about words.

Same as with scars, normally blood stains are something that can be explained simply and the places for them are quite predictable. Their repeatability is the main signal to start worrying. Although, in case of adult self-harm, blood stains are not to be noticed as easily as with teenage NSSI.

Relationships are often something that causes psychological traumas and leads to NSSI. Unfortunately, the number of young people who end up in abusive or just unhappy relationships doesn’t go down in recent years. If an individual with a relatively strong mental state can get over fights or even break up painlessly, people with weaker psych are susceptible to turning to NSSI. Besides, there are relationships that are harder to break - these are family ties that at times cause even more pain and damage.

Locking to Isolate for a Long Time

Isolating is something all of us need from time to time. But it’s vital to know the limits of the “norm”. If a person spends hours in the bathroom or stays locked in the room regularly without an explainable reason there’s something abnormal about it. And it needs to be figured out.

If to look at the above-described signs separately, they don’t seem strange at all and there are cases when such behavior or actions are considered normal. But if a combination of signs takes place or if they recur regularly, then it’s high time to give the alarm.

A Fine Line Between Self-Injury and Suicide

Self-injury is not an illness. But why is it dangerous? First, rare episodes of NSSI can grow into a compulsive habit that is extremely difficult to get out of. Second, students who self-harm do not necessarily intend to commit suicide, but by damaging their bodies step by step they erase the line between what is comparatively safe and what is deadly, and one more act of self-harm may result in unintentional suicide.

On the other hand, some students may have suicidal thoughts when self-injuring, so it’s vital to pay attention to any NSSI episodes, because the next one, whatever far it is, might be tougher than the previous and who knows how a student manages it.

Certainly, suicide is the worst ever outcome of NSSI. But there is quite a number of others that will have a negative impact on a person’s future physical and mental wellbeing. These include decreased self-esteem, feeling of guilt, development of harmful habits, continuous depression, as well as infections, and body mutilations.

How to Help Students Who Practice NSSI?

The problem of self-injury is something that has to be addressed comprehensively. Support and help should come both from college staff and close family-friends circle. If college personnel are the first ones to identify a self-harm-prone student, they have to educate the family of the student how to act not to make the case worse.

What to Advice to Parents?

How to Help Yourself Break Away From NSSI?

If you feel that self-harm is slowly damaging your life but you don’t know how to escape, here are some steps that will lead you to a happier and satisfying mental, emotional and physical state.

There are two types of psychological treatment you may go for: Dialectical Behavioral Therapy and Cognitive Behavioral Therapy. The first one teaches students how to be more positive and eradicate the causes for stress that inflicts self-injury episodes. The second variant of therapy intends to get to the underlying reasons for self-harm and change the habitual behavioral pattern while managing stress.

Stress and disbalance are the prime causes of NSSI. It’s already proven that meditation is a great way to find and keep the balance. Not only meditation provides you with an hour of calmness but it also teaches how to maintain the state for as long as possible.

NSSI is definitely not the only way to cope with stress. There are a couple of alternatives you can choose from to ensure healthier and happier emotion management. For instance, embark on physical exercises (but know your limits). Negative emotions are said to “evaporate” with physical activity and as a complement, you will get a perfect shape. Another way is to find something you love doing and engage in it while you’re stressing out. Set aside more time for art, music, dancing - whatever makes you happier.

In case you need more information on all of the NSSI aspects, causes, and steps out of it, check out the following websites.

Self-harm is an issue that puts numerous constraints on happy and healthy students’ lives. Suffering from NSSI at such a young age, full of creativity, emotions, events, and opportunities is an unpardonable waste of precious time. Self-harm is not a disease but taking it lightly will cost us thousands of broken young lives that have to blossom, but not fade.