The pandemic has hit people's personal relationships very hard. Many studies show that isolation negatively affects both romantic and sexual relationships. But now, when almost half of the US population has already received a complete set of vaccines, EduBirdie wondered how the situation would level out in the other direction and how much the pandemic had changed the attitude of Americans towards relationships and sex after it left.

We organized a nationwide survey to find out the answers and are now ready to share the results.

Data was collected in May 2021 via a cross-sectional, online, nationally representative survey of COVID-19 vaccinated (at least 3 weeks after getting the final dose of any vaccine approved by FDA) sexually active single individuals aged 18-60 years. Both paid and free social media surveys were used. Paid part was aimed to get a representative enough sample among all the states. Social media survey was open to all EduBirdie readers willing to participate if they fit the criteria mentioned above.

There was an empty comment box after each question where respondents could leave a comment regarding the question/statement if they wanted. Every participant agreed that their comments or thoughts on the survey can be used and published by EduBirdie. As a result, in addition to the main questions, we managed to collect over 4 000 comments from almost one and a half thousand people, which gave us a more detailed vision of the subject.

The initial sample size for each state was determined as 385 people with a confidence level of 95% and was reached via paid surveys. All additional participants were engaged through social media for a bigger study sample. Error margin 4.6%.

The first thing we wanted to know was how the vaccination affected the current sex life of our respondents and their plans. Overall, across the United States, 49.8% of respondents said they intend to have a more active sex life after being vaccinated. At the same time, 29.4% stated that during the past year they experienced fewer sexual interactions and 20.3% felt left out or lonely more often the past year.

The statistics for individual states turned out to be quite different.

The respondents themselves commented on their reasoning with such statements as, “I’ve had enough of restrictions. I just wanna go back to my normal life, and a lot of sex is a major part of it,” or, “I’m not saying I had a lot of sex before the pandemic but it’s definetely going to be more than the past year.” Over 1 000 people commented that their choice is based on the low level of sexual interactions during 2020.

On the opposite side we have such states Georgia, Iowa, and Washington with considerably lower numbers.

We wanted to assess the change of sexual patterns in the behavior of our respondents immediately after receiving the vaccine. One of the conditions to participate in the survey was to receive the last dose of the vaccine at least 3 weeks before the survey itself. We wanted to know if there were significant changes in sexual habits during this time.

Full statistics on all questions by state can be viewed in the appendices below.

From the comments, people often noted that they feel safe and are ready to meet new people more often and have sexual relations with less familiar people.

“I feel I’m overcompensating for the last year, and I’m not really used to that many partners but it would simply be risky half a year ago. I guess I’ll get back to normal in some time.”

“I finally feel safe to use dating apps again.”

As we studied sexual patterns and habits, we wondered how a year of isolation and a change in sex life could change people sexual mindset and whether it made them more open to new, unknown sexual experiences. We asked our respondents how willing they are to try something new in sex this summer.

45.2% of respondents at least partially agreed with the statement that they are ready to try new things in sex, in particular because of the year spent in isolation. It is worth recalling that the study focused on single people, so the statistics of relationships in couples in this matter can differ significantly. 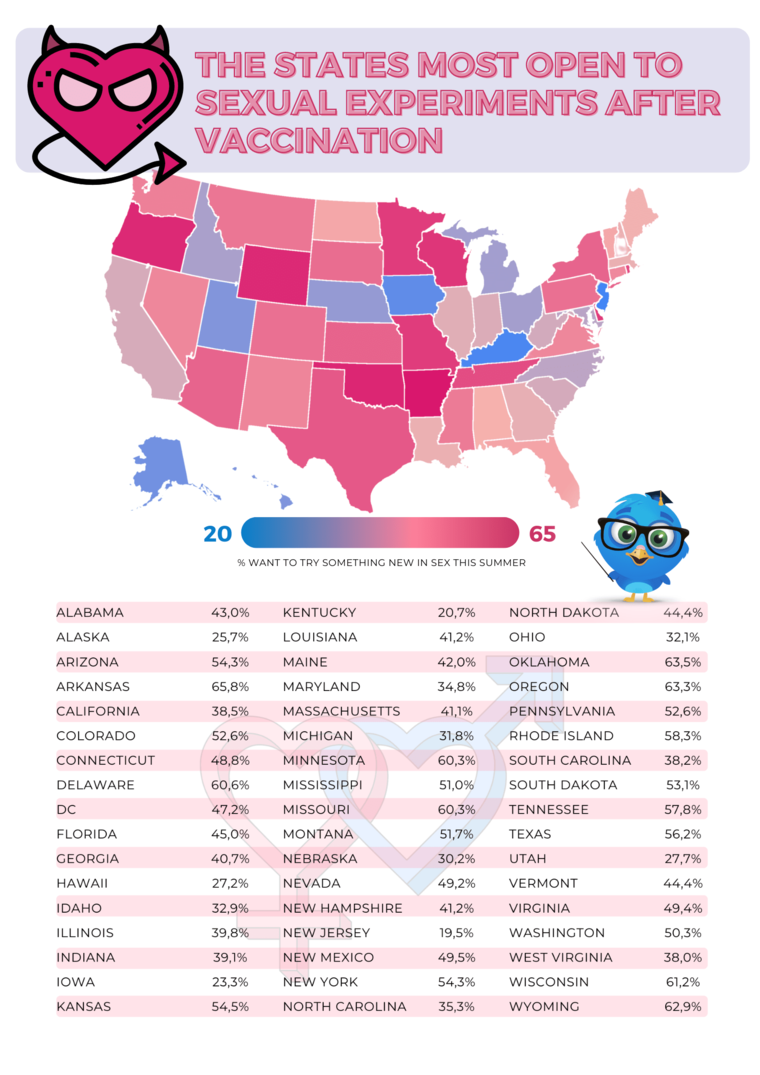 The states most conservative in sex experiments were Iowa, Kentucky, New Jersey, California, and Alaska.

Respondents' comments on this issue varied both for and against experimentation. About 400 people said they do not see how quarantine and isolation could affect their sexual preferences and desire to experiment. On the other hand, a comment like this one was not the only one: “Some quality time alone gave me a chance to explore myself. I’m not sure what is it exactly I want, but I totally know what I don’t like now.”

Romantic relationships are an integral part of sexual relationships. We wanted to know how much a year spent alone could change people's priorities in relationships and whether Americans want more serious relationships after a whole year was hindered by the virus in every possible way.

40.4% of Worldwide respondents said they are now more interested in romantic relationships. 39.9%, in turn, said that now they are looking for a serious relationship more. At the same time, 15.2% have changed in the opposite direction and now prefer a freer approach. 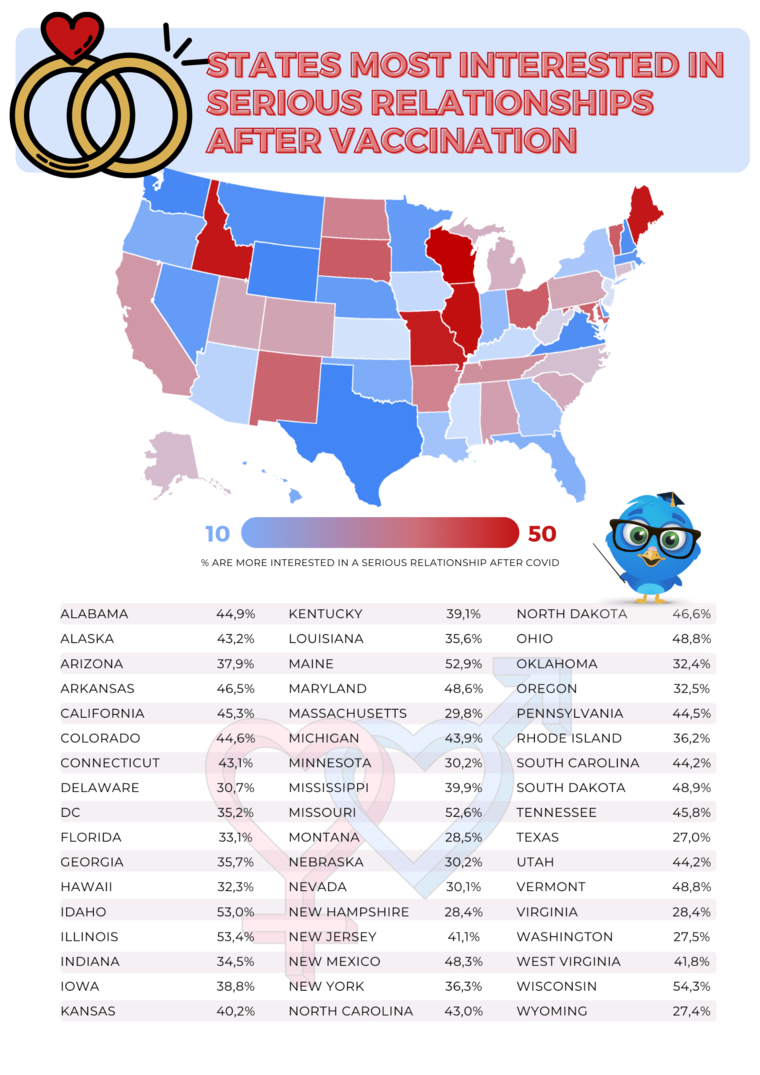 From the comments of the respondents, one could make the idea that many felt quite lonely during the quarantine, which led to the desire to build strong relationships and avoid such an opportunity in the future.

In this article, we have provided only a summary of the research. We simply could not physically talk about all the states, but full information on all the questions/statements and the numbers you are interested in can be found here.