The Strangest Essay and Academic Topics in Every State

Academic Papers Can be Quite Different

As a professional editing and academic tutoring service, EduBirdie has seen thousands of essays and academic papers within the years. Sometimes, the topics and texts our editors have to work with are so unexpected that they can’t help but smile. The stories of these wonderful pieces of writing were filling our offices, so we decided to find out what are the most unusual, unexpected, weird, and bizarre topics students ever had to write papers on. We analyzed over 400,000 academic papers submitted to us for editing within the last 4 years and picked out the most outstanding topics from every state.

If you think you see a mistake in a topic, you’re wrong. Every single one of them is intended to be as it’s written. And yes, all of them are real essays or other academic or high school papers in some way.

Here’s what we saw: 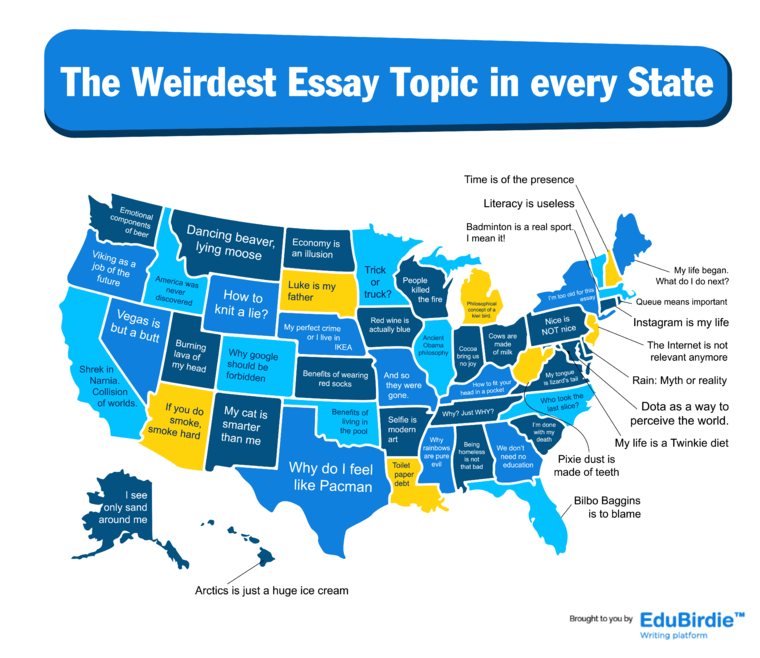 Being homeless is not that bad; Why I wish I have never approached that girl; Wine is made of water, not vice versa.

I see only sand around me; Humans and dogs are not meant to be

If you do smoke, smoke hard; Comparing modern society to a bottle of Fanta; Scottish violin as a part of the US national culture.

Selfie is modern art; Knowledge is power, but power is stupid; Technology in a world where humans can fly.

Shrek in Narnia. Collision of worlds; Sincerity and romance are outdated; How to fool people into believing you’re a fool; Empty essay (yes, that was the topic); Pros and cons of having velociraptor as a pet, Cookie is my life, but my life is no cookie, Post secondary education or how to spell your life wrong.

Why Google should be forbidden; If I had all the empty boxes in the world I would build a robot; Is it socially acceptable to shoot nudes at a park at night?

Rain: Myth or reality; Being a firefighter on a deserted island; I’m a red angry bird but I’m so calm.

My life is a Twinkie diet; There is not a single thing people do for no reason. Except for one; World from inside the microwave.

Bilbo Baggins is to blame; Dirty napkins and how they changed my life; Dancing drunk vs dancing sober. Critical analysis; Why I would never ride my unicorn if I had one; Cesar and Salinger are the same person, How to sell a picture if the only thing you have is a Nicolas Page’s nude.

We don’t need no education; Cars are made to make people lonely.

Arctics is just a huge ice cream; How to create the worst team ever?

America was never discovered; Leo DiCaprio does not deserve it.

Ancient Obama philosophy; How to make people work at my farm illegally; A donut and a dog lost inside myself; How to create a decent language yourself.

Cocoa brings us no joy; What would the world look like if it was made of potato?

Benefits of wearing red socks; Camping in Kansas as an act of self-punishment; Farts smell bad, but it could be worse.

How to fit your head in a pocket; My windows of opportunities are stuck and need some grease; Comparing cockroaches to hashbrowns.

Toilet paper debt; Comparative analysis of a high school vs a prison; Dancing with the rain now and 50 years ago.

My life began. What do I do next?; Pros and cons of having a king in the US.

Dota as a way to perceive the world; My life’s for sale. Huge discounts. Today only; Hypnotic effects of junk food and Barbie dolls.

Badminton is a real sport. I mean it!; Hitler’s sexual life and its effect on our society today.

Philosophical concept of a kiwi bird; Media outlets are the modern world trash bins; How I tricked Facebook into buying Instagram.

Trick or truck?; How would the US Constitution look like if Keanu Reeves had to write it; Shrooms or weed, what’s best for my kid?

Why rainbows are pure evil; Is it better to sail a ship or to sell a ship?; I am that girl: my poppa was a copper and her momma was a hippie; Roadmap to the closest successful fail.

And so they were gone; If I was a dog I would love no one; Geography is more “bio” than biology.

Dancing beaver, lying moose; Six things I would never do on the moon; Avatar is way more real than it seems.

My perfect crime or I live in IKEA; What would happen to Hulk if he was real?; If I was a millionaire, I’d never donate my money.

Vegas is but a butt; How would losing all the hair affect humanity; Virtual reality is the only real reality.

Time is of the presence; Why talking too much can never be bad?

The Internet is not relevant anymore; What connects independence day to clowns; My dream is becoming a professional drinker; Coffee is what makes us sleep late.

My cat is smarter than me; Money can’t buy happiness. Followers can.

I’m too old for this essay; How would I rule my criminal syndicate in 1960-s New York; Why do I never wear pajamas at a pajama party?; Do I own my cat or does she own me?; What would I do if I lost a winning lottery ticket; The Statue of Liberty should be 16% smaller.

Who took the last slice?; Grass on the other side always needs cutting; PC gaming without a PC: How my imagination drives me.

Cows are made of milk; Mickey the Cat—effects of character substitution on child development; How would it feel like to spend the rest of your life on a plane?

Benefits of living in the pool; Pros and cons of taking a break with Rachel.

Viking as a job of the future; The person that was meant to be me but is not me; If I could eat fire I wouldn’t be a dancer; Wrong is still right, no matter how sober your brother is.

Nice is NOT nice; He was a skater boi. She did ballet; How long can one wait for the end of the world to come?

Queue means important; My desperate life without sms in 2006.

I’m done with my death; Action movies define the future; The best ways to destroy humanity within 36 hours.

Luke is my father; The feelings we used to hide or how to steal a knight’s dragon; How to choose the best partners for cheating;

Why do I feel like Pacman; My family should’ve never done that; Why do I deserve to teach the class instead of my professor?; A game of Monopoly destroyed my life; Houston should be the new capital of the US; The best sauce for a burger my life is.

Burning lava of my head; Video game aggression helps me struggle through the world.

Literacy is useless; Which animal should be the first one to Mars?

My tongue is lizard's tail; Why I would never climb Mount Everest.

Emotional components of beer; The best cake is the one from the shop; Why my boyfriend should get a tattoo.

Pixie dust is made of teeth;  How to dig for gold from the inside of a warehouse in West Virginia?; Why I would never climb Mount Everest.

People killed the fire; Pros and cons of adding my parents on facebook; Virtual reality is the only real reality.

How to knit a lie?; The balance depends on our Christmas socks.