Can You Finish Your College? How Alluring Is Your State? 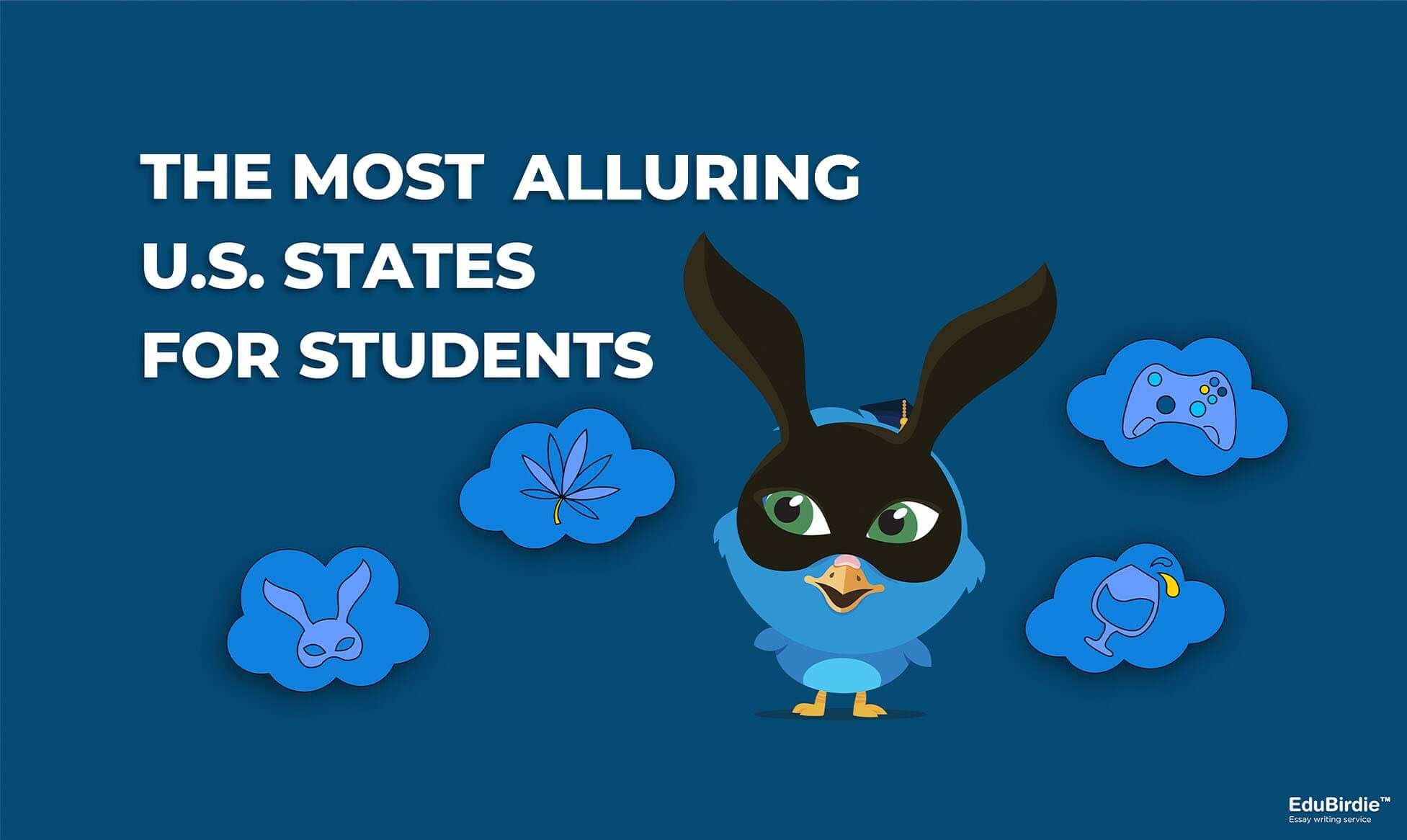 University life doesn't always turn out the way we imagine it. Probably, every teenager has seen movies about high school or college. Huge parties, adventures, relationships, and many other things distract freshmen from their studies.

And now, the new school year is just around the corner. Students, no matter freshmen or seniors, need to be careful. There are so many temptations around.

Edubirdie decided to find out which states offer the most temptations and distractions for students.

The Most Alluring States in the US

We compiled our index based on indicators that can distract students or affect their learning process: college dropout rate, amount of drinking places per the total number of students in the state, percent of adults using cannabis, TV watching time, gaming time, number of gamers meetups and events, number of kinky and fetish parties.

Bringing all these indicators together, we have deduced a general index showing the most alluring states for students, those places where it will be most difficult for them to concentrate without being distracted.

The clean favorite and the most alluring state for students is California. California got on top at 3 of the studied indicators at once and scored the highest total score. California turned out to be the most beloved state for people who are into any kind of games. Students who like to pass the time playing either “Monopoly”, or “Red Dead Redemption 2” might find studying in Cali quite a challenge. Residents of this state spend the most time playing games, and it is here that most gaming conferences and meetups take place. The icing on the cake, California was in the top in terms of the number of kinky and fetish parties Meetup groups. Known for its freedom and openness, this state will prove to be a test for hardworking students who plan to focus entirely on their studies.

Florida, Texas, and New York are a little behind. These states come out on top thanks to their high college dropout rates—as high as 39.5% for Florida, 35.5% for New York, and 43.6% for Texas — and TV time, which averages about 3 hours a day in these states.

Another of the more unexpected and most alluring states was West Virginia. The state took the lead with the highest number of strip clubs per student and time spent watching TV. As many as 113 strip clubs are registered in the state. This is not the largest number of such institutions among all states, but given that the college enrollment in West Virginia is only 138k, this puts the state in the top in this indicator. In terms of TV time, the average West Virginian spends an average of 4.5 hours a day watching TV.

Montana finished in 7th place with an overall score of 3.25. Even though the state had very low numbers in terms of the number of kinky and fetish parties Meetup groups, the number of gamer Meetup groups, and the time people here spend playing games, the state still ranked among the most alluring ones, ranking first in the number of drinking places per student. There are 532 bars in Montana with college enrollment as low as 45.5k.

Another state that we did not expect to see in the top 10 is Alaska. While Alaska did not rank #1 in any of the metrics, they averaged high in many of them. The state showed a high college dropout rate, cannabis consumption, number of strip bars and drinking establishments per student, and TV watching time.

On the other side of the list we can see the states where students would find it easiest to concentrate on their studies and where they would encounter the fewest distractions. The most focusing state for students based on our index was Utah with a total index score of 1.87. The state has a fairly high dropout rate of 34.4%, but all other indicators remain low, creating optimal conditions for students.

Alabama, Minnesota, New Hampshire, and Maine also joined the list of the top 5 least alluring and the most focusing states for students. 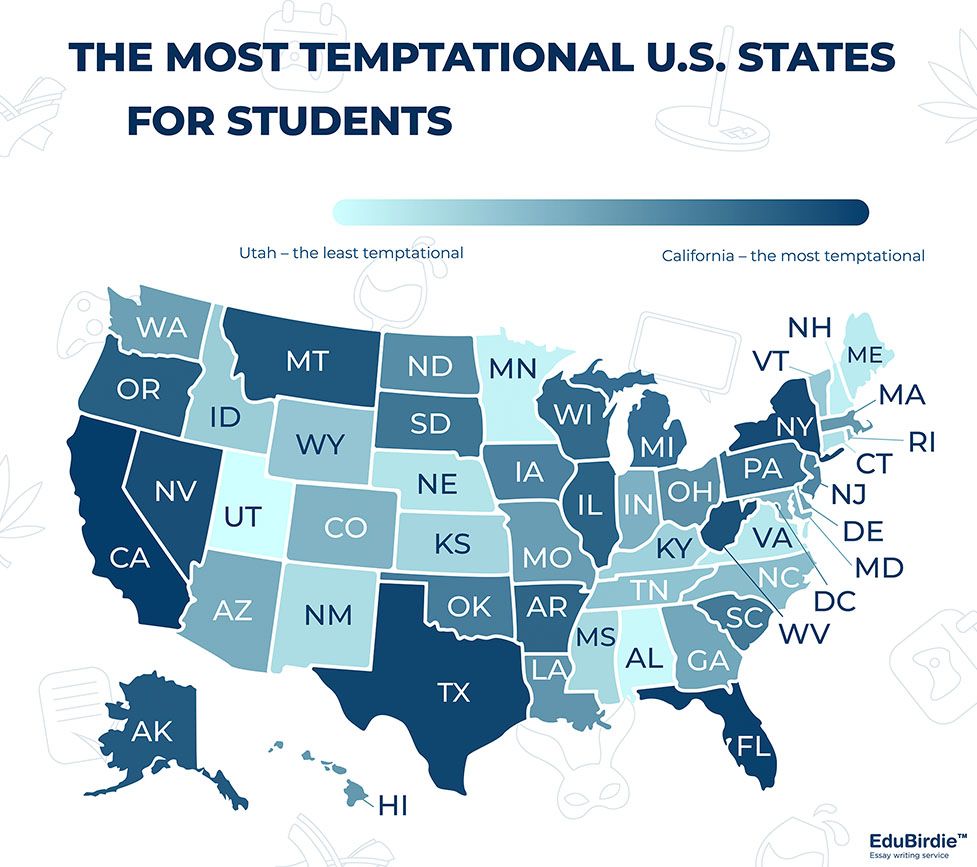 California ended up on top, hosting exactly 70 of these groups which gave the state a huge advantage in the total score. Florida and Texas got the second and the third score with 39 and 26 parties respectively.

A very telling factor that directly shows how many people in the state go to college but never graduate for one reason or another. Many of these reasons can be the temptations we studied.

According to statistics, Delaware (53.7%), Hawaii (49.8%), Mississippi (45%), Arizona (44.1%), and Georgia (44.1%) colleges have the highest dropout rate. The following states didn’t show high results In the overall index, given other indicators. For example, Hawaii, the second-highest dropout college state, ranked only 23rd on the overall list. The rest of the five states are even lower.

On the other side, we have Washington (22.7%), Oregon (24.5%), Alabama (24.8%), Wisconsin (25.8%), and Nebraska (26.9%). It is here that the biggest percentage of students graduate from universities and colleges. Here, we also see a correlation with the overall index. So, for example, Alabama, one of the states with the lowest dropout rate, was at the very bottom of the list of the most alluring states (index 2.17), in the second position among the states with the least distractions.

That's how Montana, with 532 registered drinking places and a student enrollment of 45.5k, came in first place. Next up is Wisconsin. There are 2,674 drinking places in the state (6th in the number of bars in the entire US). The student community of Wisconsin is almost 319k, which, after calculations, put the state in second place in this indicator.

Another interesting favorite in this indicator was Alaska, taking 4th place. The state is known for its strict alcohol laws. So, in many communities there, alcohol may even be banned. Despite all this, the number of drinking establishments per student here turned out to be quite high.

Data from Statista showed us the percentage of adults that have used cannabis by the state during a one-year time frame. DC reported the highest marijuana usage with over 30.8% of people that used it. Vermont, Oregon, Washington, and Colorado were shortly behind.

The states with the lowest levels of cannabis use include Texas (12.8%), South Dakota (13.4%), Virginia (13.8%), North Carolina (14%), and Utah (14%). As we can see, among the states with a low level of usage, there are both favorites in the overall index, such as Texas, and Utah, which took a place at the very bottom of the table, becoming the most focused state for studying.

We have analyzed info about strip clubs from worldbeststripclubs.com, which gave us 5,044 registered strip clubs across the US. Just like with the number of drinking places, we looked at how many strip clubs there are in a certain state and divided it by the total college enrolment in this state.

This way, West Virginia is the best state for students that like to spend their nights enjoying the art of undressing. There are 113 strip clubs in the state. This, together with college enrollments of almost 138k, brings the first place to West Virginia.

Overall, Texas (284) and California (240) have the most strip clubs, but their high student enrollment figures put them at just 23rd and 43rd positions, respectively. Not all of such a huge number of students will be able to fit in to look at one strip pole.

TV can be a very distracting factor for students trying to focus on their studies. Thanks to the American Time Use Survey, we looked at how much time people in a given state spend watching TV on average per day.

West Virginia leads by a very wide margin. On average, locals watch TV for about 4.5 hours a day, well ahead of Delaware's 3 hours and 47 minutes. Along with this, West Virginia is also ranked 6th in the overall list of the most alluring states for students.

The least TV-watching states are Utah, Maine, Vermont, and Alaska.

Just like with kinky and fetish parties, we used meetup.com to see how many gamer meetups are taking place in a given state. We also checked fancons.com and analyzed 70 upcoming video gaming conventions 2022-2023 in each state. Of the 584 US gaming groups and conventions analyzed, 110 are based in California. The state is widely known for its gaming community and a large number of events dedicated to this. Second place was shared by New York and Texas, more than 2 times behind and having 50 such groups or conventions each.

The American Time Use Survey 2021 showed the average amount of time people in a given state spend playing games. We have analyzed what percentage of each state's population mentioned gaming as a way to spend their free time, time spent gaming, and the U.S population in 2022. Then we counted the time played by all players in each state per day and calculated each state’s index.

Thus, as in the case of gamer meetups, California turned out to be the most gaming state. On average, people in California play just over 2 hours a day, which is not the highest figure, but thanks to a large number of gamers, the state has come out on top.

The most non-playing states were North and South Dakota, Wyoming, and Arkansas.