The problem of young people leaving their education without finishing it has existed for decades. In every study year, there were always some students who couldn’t keep up and decided to abandon college or uni. Some disliked their chosen direction, others got low grades or had medical or personal reasons for discontinuing classes. But beginning with 2010, the dropout rates have started being an actual problem.

More and more students are leaving colleges, with the numbers reaching alarming levels. What’s even more disturbing is that most young people aren’t doing it because of the lack of knowledge or dedication to their studies. According to the conducted survey, 54% leave due to their inability to combine work and classes, with the former being their only chance at paying for the latter. So, a toxic circle has been formed, and the problem continues to grow worse.

Current Graduation Rates and Their Meaning

Education is still as popular as ever: millions of young people are obsessed with the idea of getting enrolled and receiving their degree. This obsession is fuelled starting with early education development centers, where the stories claiming that to make a proper living, you have to get a good job and to get a job, you have to graduate being retold over and over again, basically from the start of children’s lives. And it’s working! Huge numbers of students apply to colleges. But only a part of them manages to graduate.

According to the recent statistics, about 69% get their degrees, but it happens only in eight years while the studies themselves last for four. It means that lots of students make at least temporarily breaks from their education, unable to finish it timely. In turn, it makes overall 4-year graduation rates even smaller, below 60% for both men and women, with women graduating by 1% more often. Basically, it implies that one-third of students dropout of college entirely, and this is indeed a worrying tendency because it contrasts brightly against the overall American obsession with getting a degree. So what’s happening?

Most Common Reasons for Dropping Out

Of course, the low graduation rate has started to attract the attention of many researchers. Upon reviewing surveys, it was revealed that most students have similar reasons explaining their decision to terminate their studies, and laziness or change of mind has nothing to do with it. 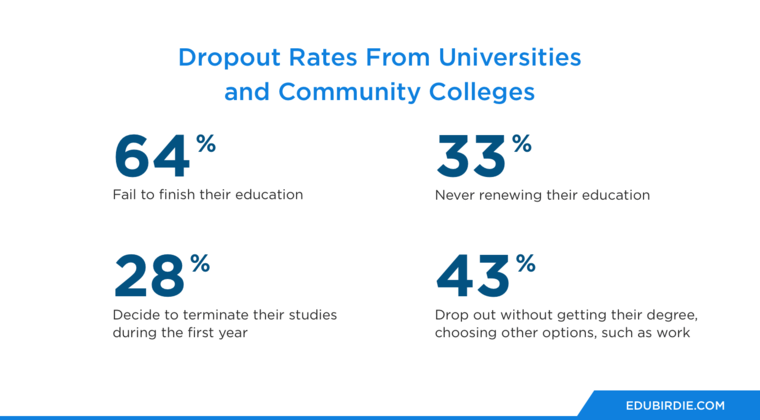 Taking into account data from different educational establishments, it’s possible to make a conclusion about how many people leave what places of study and when. It can help in identifying the urgency of a problem and devising solutions to it. So, in terms of universities, 64% fail to finish their education. Some of them enroll again later or take breaks, but the truth remains undeniable: out of 100% accepted into uni, 64% drop out at some point, regardless of their future decisions.

Another set of data on a different sample group of universities showed a similar result. 57% fail to get a degree timely. Out of them, 33% choose to drop out for good, never renewing their education. In addition, 28% decide to terminate their studies during the first year. These rates are pretty horrifying, especially in comparison to more acceptable rates presented by other countries.

With community colleges, the situation is rather similar. The whole 43% drop out without getting their degree, choosing other options, such as work. Some of them hope to resume studying after saving up, but as results show, very few of them actually do it. So, there are huge dropout rates in both unis and community colleges, and it can be seen that the problem is likely to gain even more magnitude in the future if nothing is done.

The only positive graduation statistics concerns the rates of dropouts from high school. They aren’t growing — on the contrary, there has been a decrease in them. 17% leave high school without finishing it. It’s an improvement from 21% that was witnessed five years ago. However, this number isn’t very reassuring either because it’s still pretty high, so this area requires intervention as well.

What Consequences Do Such High College Dropout Rates Have?

The implications of this kind of dropout rates are far from positive. As analysis and comparison show, apart from high school, all other rates continue to deteriorate. It means that more and more young people start finding it impossible to finish their education and get a degree. If it all ended here, the problem could be a bit more bearable. As it is, it has drastic long-term consequences.

First, students who drop out without a diploma end up unemployed more often than those who finish college. The difference isn’t big — based on a survey, it reaches only 2-3%, but much more is hidden behind this number. People without a diploma are forced to accept low-paying jobs with crazy schedules in the majority of cases. It means that they are unable to improve their financial situation and build a life they would be satisfied with. Most workplaces demand the highest education, and anyone who doesn’t qualify is discarded unless they have some unique proven talents and achievements.

Another problem lies in debt accumulation. Students who drop out tend to take loans for their studies in a desperate attempt to remain at college, and they are unable to pay them off once they do drop out because they don’t have a good job. So, the interest rates increase, making them further indebted.

Then there is the fact that such students tend to suffer from psychological issues more than those who receive their diploma. Even those who had proper self-esteem at first begin to feel rejected and unworthy once they fail to find a good position and become victims of job discrimination. Debts upon debts worsen this condition, especially if more successful friends of these young people did graduate and are leading a pretty enjoyable lifestyle.

The problem of increasing dropout rates among college students is urgent and requires immediate resolution. It ruins the lives of millions of young people who enter college with high hopes and are forced to abandon them when the reality of debts and financial inadequacy crashes down. The loans have to be made cheaper and more accessible. Education costs have to be reduced by several times to foster equality, not a debt race. If this problem is left unaddressed, the results can be daunting.