Email a Professor Without Being Annoying

For many college or university students, professors are some sort of idols – their focus on knowledge, their life experience, but also their high morals and beliefs make many students revere these people but also make them feel some distance. Additionally, the level of cooperation and the quality of personal communication with professors can determine a student’s attitude towards a certain subject and even his or her academic achievement.

Given those mentioned above, students might oftentimes feel frustrated or hesitant about communicating with their professors. For many of them, this happens in particular when faced with the need to communicate in a written form given the expected requirements for formal written language.

One specific scenario is communication by email. This is an act of one to one written communication with the professor as part of which you will be receiving his or her full attention with regard to your issue(s). Hence, this needs to include very efficiently and clearly formulated thoughts, questions, or clarifications, all in a formal language. Get high-quality emails for your needs! Get perfect grades with our expert-written papers. Affordable prices and fast delivery. Order now and get the best college papers for sale!

Main Reasons to Email a Professor

Students might need to email their professors for a number of reasons. Below is a general list of such possible reasons along with email samples corresponding to each situation:

Before writing such an email, you should inform yourself about the late submission policy accompanying the task – the latter might clearly describe penalties according to the degree of lateness. Even when there are such clear policies in place, writing your professor is often still both wise and necessary. First, it is important to let the professor know how much late you expect to be and that you are still working on the task. Second, students sometimes encounter extreme circumstances that make fulfilling an assignment impossible or of secondary priority. Such events could include extreme events, funerals, power or Internet outages (provided the latter can prevent work on the corresponding task). Letting your professor know might result in an empathic decision that could abolish the penalty. But avoid lying or presenting unrealistic excuses - these can make your situation much worse. Also, when you are at least in part guilty (for instance, by postponing a term paper to the last 3 days of the term), acknowledge this guilt rather than denying it.

Everybody can get sick so that work capacity is lost either partially or entirely – this could include anything from accidents resulting in physical trauma to powerful migraines. Obviously, it is always good to have some proof to demonstrate you are not lying. Take care to make it clear how a certain health issue prevented you from performing a task. Both in terms of late submission and sickness, it makes sense to announce the professor about the problem in advance – if this happens enough time before the deadline, he or she might have less suspicions that you’ve made up an excuse because you are simply out of time. 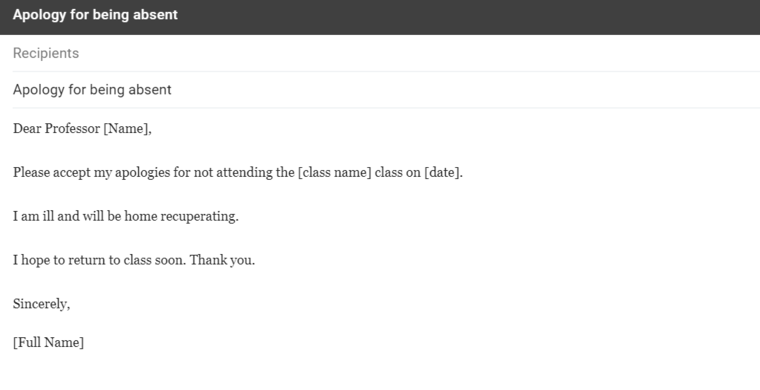 Oftentimes, the reason for emailing a professor is simply the failure to understand the requirements for a given task. Apart from clarifying these for yourself, you might be doing a favor to other students or even to the professor’s himself or herself. Ideally, one should carefully examine the instructions or even discuss them with a few colleagues to check out whether they have similar trouble understanding the task. Clarifications could also involve checking how appropriate a source of evidence is or seeking approval for a freely chosen essay topic.

Key Conventions When Emailing a Professor

Emails are rather formal messages – they resemble very much traditional letters, hence, certain conventions and requirements apply when formulating them:

Writing an email shouldn’t be a great challenge, especially if these general recommendations are followed. A key thing to note is that ultimately, this is yet another form of communication, which despite some requirements of formality, is intended for maximum efficiency and clarity.