The Most Popular Songs For Studying To

Whether you’re building up to a big exam, writing an essay or just need to get in the zone and focus, it’s all about being in a comfortable and relaxed state of mind and one of the best ways to get yourself into that perfect headspace is through music!

While it isn’t for everyone, music can really help to set the atmosphere when working, especially atmospheric beats that you can put on the background that help to tune out the noise of the outside world.

But what are our favourite tunes to study to? To find out, we’ve analysed hundreds of studying and homework Spotify playlists, to see which are the most common.

Having analysed playlists containing over 100,000 songs, these were the tunes that appeared the most frequently. While lo-fi, instrumental beats are usually the way to go when it comes to study music (with one such song, Affection, by Jinsang, appearing in 53 of the playlists that we analysed and racking up over 66 million plays!), we decided to stick to more mainstream, popular songs for our list, with the seemingly inescapable ‘drivers license’ by Olivia Rodrigo taking top spot.

The song and holds the record for the most Spotify plays in a single day with over 15 million so it’s maybe no surprise to see it creep into our list! 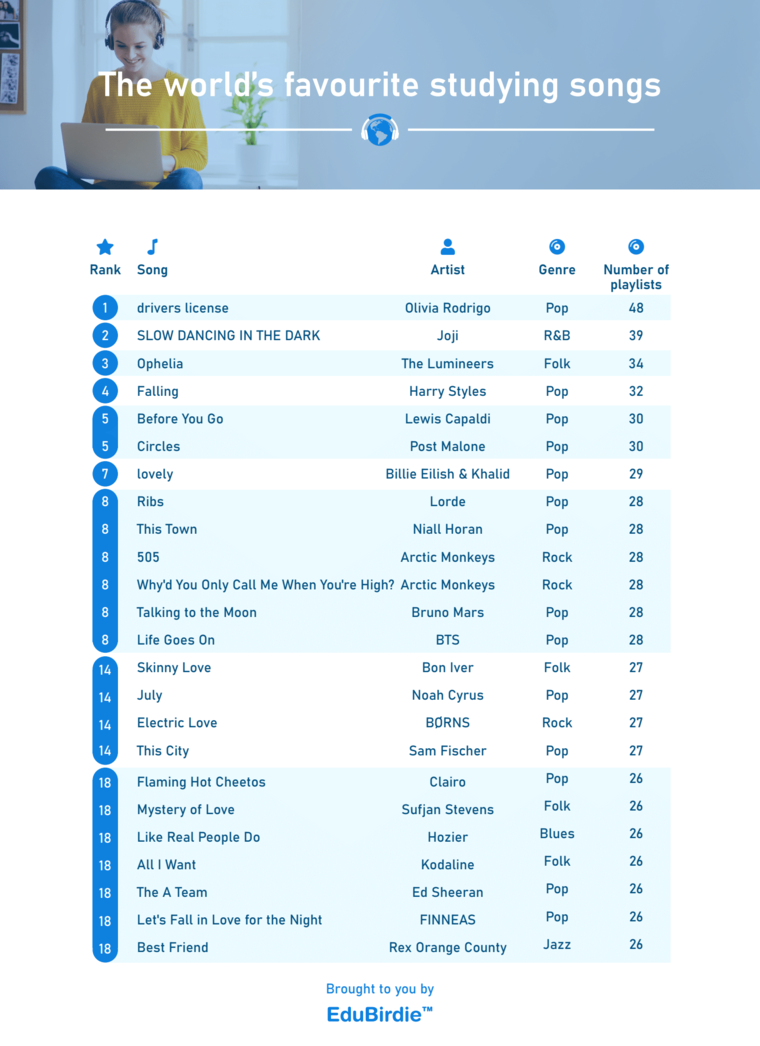 But who are the artists that appear the most often on Spotify users’ studying playlists?

Considering their phenomenal global following, the fact that K-pop boy band BTS came in the top place probably doesn’t even have much to do with their music being particularly good for studying, more just the fact that they have so many dedicated fans who can’t help but include them in their playlists!

In second and third place are one of the most successful women in pop from the last couple of decades or so, as well as another who looks set to follow in her footsteps for many years to come, Taylor Swift and Billie Eilish.

Much like the most popular songs, we chose to just look at mainstream artists, but there were also many lo-fi studying channels and producers which appeared in large numbers of playlists too, as well as composers such as Hans Zimmer and Mozart! 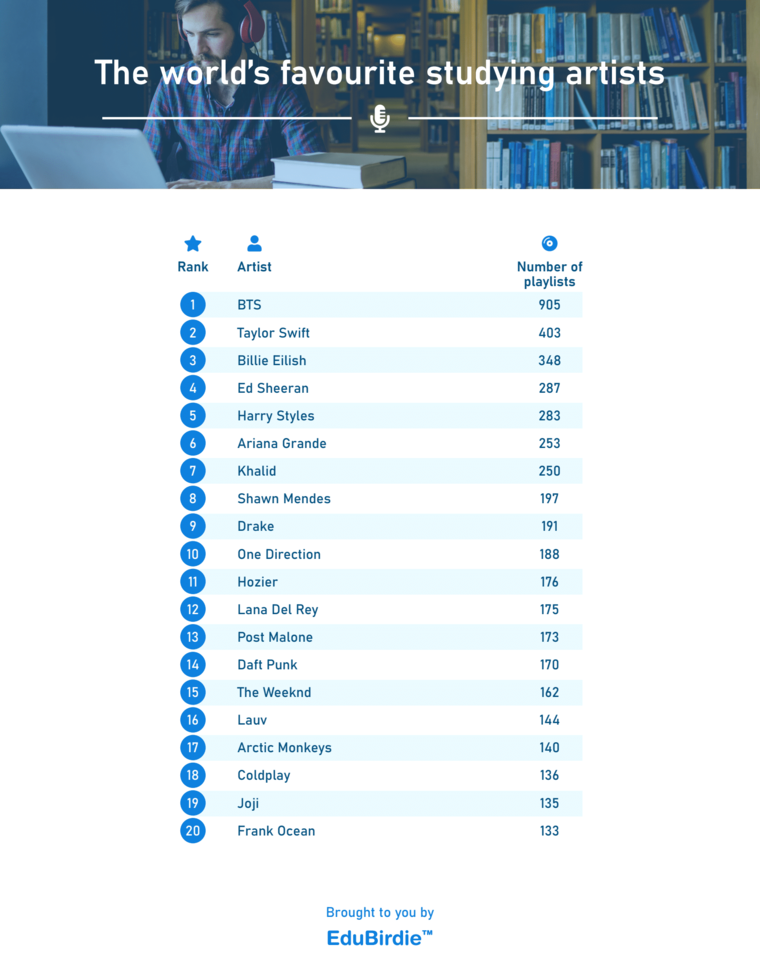 The ideal tempo for studying

The music you choose to listen to while working is entirely up to you. In fact, while conducting we came across playlists containing everything from rain noises to heavy metal!

But the general wisdom is that the best songs for concentrating are atmospheric, ambient sounds, preferably without lyrics, that just sit in the background and block out any distractions, while allowing you to focus on the task at hand.

So, was this true when it came to our songs? We analysed around 100,000 songs in total and taking each and every one into account, the average BPM (that’s beats per minute) came in at 112 BPM.

That works out at about one beat every half a second, and in musical terminology would fall in between andante (at a walking pace) and moderato (at a moderate pace).

We looked at over 100 playlists containing over 100,000 songs on Spotify which contained the words ‘studying’ or ‘homework’ in the title or description, counting which songs and artists appeared in the highest number of playlists.

Sort Your Music was used to find the BPM of each track.