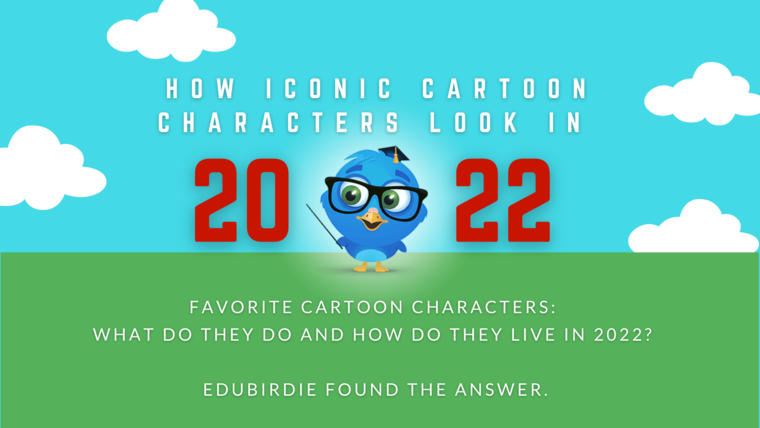 Time, our interests, people around us, our appearance, our tastes change, but only one thing doesn’t - our favorite childhood cartoon characters. The 2000s gave us an incredible amount of cool and vibrant animated series and generation Z grew up on them. And now generation Z is studying at the university, raising children, working, and paying taxes, so our Edubirdie team decided to imagine what our favorite characters are doing now and how they look.

We selected the most memorable animated series for us: Jimmy Neutron: Boy Genius, Hey Arnold, Phineas, and Ferb, As Told by Ginger, Jackie Chan Adventures, and decided to study what these characters will look like in 2022 based on official statistics and data that we have from the animated series.

Each character from the animated series is very different and interesting. All the storylines of these heroes are different from each other, so we dreamed up who everyone's favorite characters could become in real life. 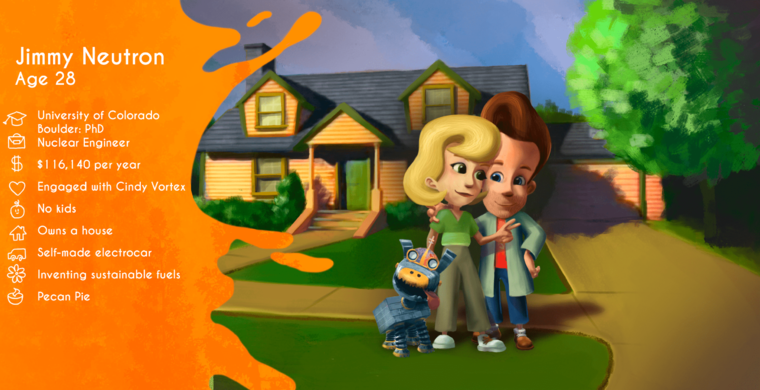 Jimmy graduated from the University of Colorado Boulder, where one year of study at the Faculty of Nuclear Engineering costs an average of $11,872. Half of his tuition fee was covered with a scholarship. After university, Jimmy ended up with a debt of $18,635.

We are sure that Jimmy has become a brilliant nuclear physicist and, thanks to his profession, has a stable, high income, approximately $116,140 a year. High wages allowed him to quickly pay off student debt, take out a mortgage on his house and create an electric car for himself. Because let's be honest, no one could have made a car for him better than him.

He lives in his hometown of Retroville, Colorado, next to his loving wife-to-be Cindy Vortex, and permanent friend Goddard, whom Jimmy created as a child (this proves to us that he is actually a genius because she created a friend who is forever with him and never betrays!)

Jimmy likes junk food, but his favorite dish is still a pecan pie. He likes to spend his time with his wife or conducting new experiments and trying to invent sustainable fuels. 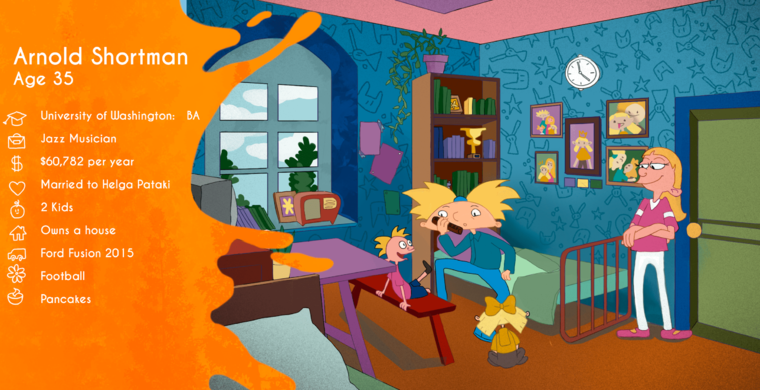 We all remember Arnold Shortman as a sweet, optimistic, pleasant, and calm boy. He was raised by his grandparents, and we are sure that he grew up to be as cool as we saw him in the animated series.

He grew up to be a good man, and soon became a wonderful father and loving husband to the lady of the heart, Helga Pataki, who has been crazy about him since childhood.

Despite his great love for American football, he failed in this field due to high competition and did not become an athlete. He graduated from the College of Music in Washington State and paid $13,690 a year in tuition. After his college, he continued to pay off a student loan, which amounted to $25,032.

Arnold became a jazz musician. He continued to play the harmonica and also mastered the saxophone. Now, he plays in a local jazz band and teaches music to the younger generation.

Arnold drives Ford Fusion 2015, still loves to watch football, and even occasionally plays some with his friends and their kids. He brings up two children of his own together with Helga, loves to spend time with them, gives gifts, and teaches the kids his musical art. 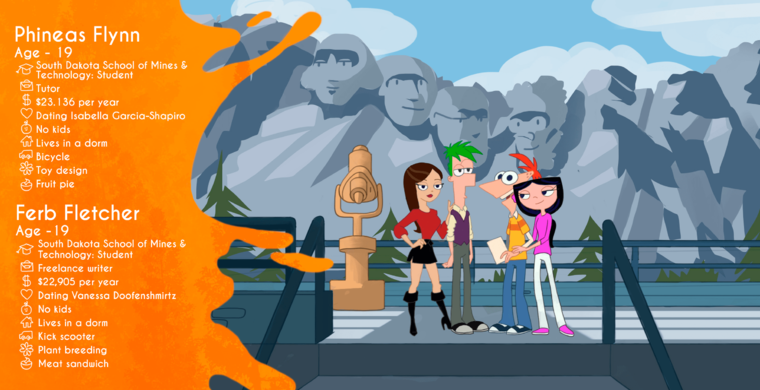 Phineas and Ferb are the perfect representatives of how we wish we could spend our summer holidays and couldn't. Their eternal adventures, ingenuity, and optimism charged us with new achievements.

Stepbrothers differ in appearance, but they are similar in their interests.

In 2022, the brothers are 19 years old and studying at the South Dakota School of Mines & Technology. Phineas chose chemical engineering, where the average cost is $48,798, and Ferb chose biological engineering, the cost of which is $43,363.

The guys spend their free time with their girlfriends: Phineas with Isabella Garcia-Shapiro, and Ferb with Vanessa Doofenshmirtz.

These guys are still adventurous, and when they manage to break away to the fullest, they are happy to use this opportunity. This weekend, they even went with their girls to see Mount Rushmore and told how they once put Candace's head there to please her on her birthday. 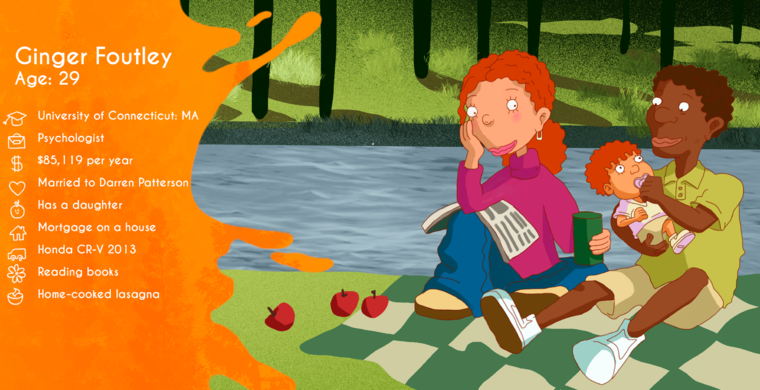 Ginger is, sweet, beautiful, a redhead who loves her friends and never puts up with injustice.

Now that Ginger is 29 years old, she is a wonderful wife and a loving and caring mother.

Thanks to her expressive character traits and spiritual softness, she became a good psychologist. She graduated from a university in her home state of Connecticut, where she paid $7,413 a year in tuition. She is still paying off her $32,200 student loan, but her husband Darren always tries to help her with this.

Ginger and Darren have a beautiful daughter, with whom, more than anything else, they love to spend time, dress her up in different outfits, and make gifts.

Ginger has a perfect family and she is happy. We know that for sure. 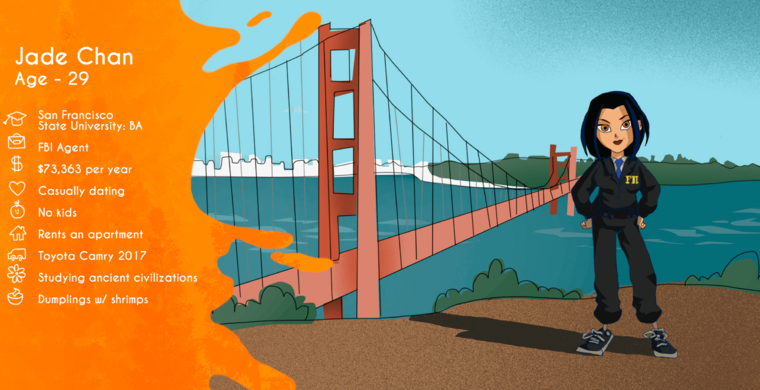 The badass Jade Chan could kick anyone's ass as a child, but in 2022, twenty-nine-year-old Jade can do it legally, because she is officially an FBI agent.

Her sense of adventure dates back to childhood when she accompanied her uncle Jackie Chan and her impulsiveness, quick wit, and flexible mind often helped save situations he got into.

No wonder she chose the profession of an FBI agent. She studied in San Francisco, and since she is not a US resident, she had to pay more tuition per year. The tuition fee was $30,853, and she now earns an average of $73,363 per year. Her loan was $15,050, but she quickly paid it off.

She rents an apartment, drives a Toyota Camry, punishes bad guys, and remains the coolest and funniest girl in this city.

The age of the characters is calculated using the difference between their age in the final season of the show, the time it was released, and 2022. Character location is based on the series.

The average salary is based on Occupational Outlook Handbook by US Bureau of Labor Statistics for specific jobs. Student salaries are based on Indeed data for college students.

College tuition costs are based on the education cost for specific programs in the mentioned universities.

We took the characters’ interests from the initial cartoons with their 2022 social status to assume their current food and hobby preferences.