How To Write a Cause and Effect Essay 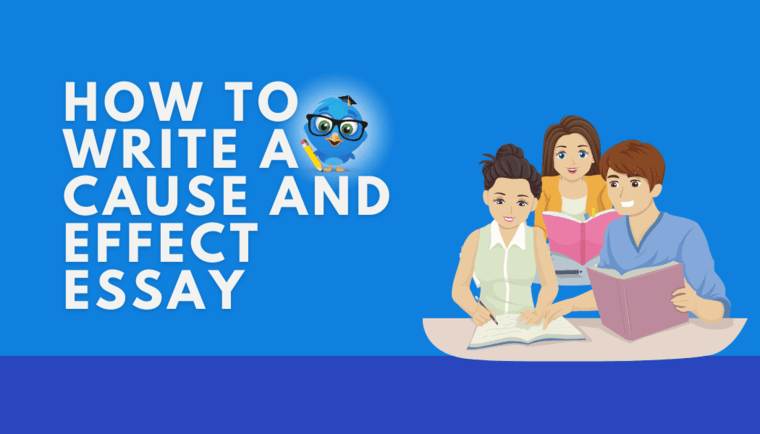 Have you ever tried to explain to someone reasons why you behave in one way or another? Or have you discussed some event? This is exactly what a cause and effect essay does. It explores either reasons due to which some events or situations occur or consequences of some things and events that are already in place. Although name “cause and effect essay” suggests that both causes and effects are examined, students often have to choose on which factors to focus most. The choice depends on topic and your own preferences unless task has already been provided by teacher. If your professor likes to provide students with freedom of choice when it comes to topics, we have some good cause and effect essay topics you can use right now.

Read Also: What’s Costco Essay and How to Write It?

Organization Patterns for Cause and Effect Paper

When it comes to cause and effect essay writing, structure is very important. You will reveal your opinion more effectively with a well-thought-out organization reasoning. Depending on essay focus, its structure varies, and EduBirdie prepared for you three major organization patterns you may use to write the best essay. Two these methods are frequently applied in high school and college writing. Third method is not that widespread, but in some cases, you may benefit from using it. When deciding on structure of your future paper, consider topic and ask yourself which of two things you want to do: 1) to explore effects or 2) to examine causes. Depending on your response, you should choose one of following options of essay organization:

Essay that focuses on effects analyzes how one or usually more effects result from a particular cause. If you choose this organizational pattern, you will need to explain in separate paragraphs several effects of a certain situation or event (your chosen cause).

If you choose this pattern of organization, you will need to explain how one or usually more causes lead to a single effect. This structure type suggests that each cause will be examined in a separate paragraph.

There is one more approach to structuring a cause and effect essay. It is not as popular as mentioned two, but in some cases, it may turn to be just what you need:

Apply this pattern when you need to explain “domino effect” of how events lead to one another. This structure requires you to devote each body paragraph to an event caused by some other event and leading to one more event. Causes should build a chain, uniting the first and the last event in a logical sequence, which explains cause and effect process. If I had no time to decide which pattern of organization fits my topic best, I would ask EduBirdie for a time-saving solution: I would choose professional writer who would write an essay for me.

Connect with our top cause and effect essay writers and receive a paper sample crafted to your needs.

Cause and Effect Essay Outline

Like other essays, cause and effect paper can adhere to standard five-paragraph structure. You may always add more body paragraph if your topic is too complex to be discussed in such a limited number of paragraphs. For US high schools and local colleges, this number of paragraphs is often enough, so you can use sample outlines when planning your own paper structure.

Peculiarities of such essay components as a thesis statement and cause and effect paragraph often depend on essay’s focus and your choice of structure. Do you want to find out how thesis and body paragraphs change depending on focus? To clarify this point, EduBirdie has prepared two brief sample outlines that illustrate differences. You should either use one of them or ask EduBirdie for a ready-made detailed cause and effect essay outline that addresses your topic.

Hook: The United States is most obese country in North America with more than 36% of population having a body mass index of more than 30.0.

Thesis statement: Many suffer from obesity in the US because they watch too many commercials, buy cheap fast food, and play too many video games.

Body paragraph 1. Watching too many commercials contributes to obesity in the US, because viewers believe adds and buy foods that are actually bad for their health.

B. Commercials promote foods that contain too much sugar.

Body paragraph 2. Cheap fast food consumption is another factor that contributes to obesity.

A. It is easier to get fast food because it is cheap and available.

B. Fast food is harmful, as it contains fats that are not good for health.

Body paragraph 3. Because people play too many video games, their lifestyle becomes sedentary, and they gain even more weight.

A. Video games attract many people, who already have extra weight.

B. Video games consume much time, leaving no room for active sports.

If people in the US did not buy unhealthy products promoted in commercials, consumed less fast food, and spent less time playing video games, they would get rid of problem of obesity.

Thesis statement: It leads to the sea level rise, contributes to the extinction of species, and negatively affects health.

B. Melt-water flows into the ocean to increase sea level

A. Climate change influences an increase in temperature

B. Species extinct because of unfavorable environment and droughts

A. Heat waves become longer because of climate change

B. People suffer from droughts and extreme temperatures

Climate change is a major cause of sea level rise, extinction of species, and negative effects on human health.

These outlines are very brief and you may want to find out more about process of writing an outline. EduBirdie explains how to write an outline for an essay in great detail, and you can easily adjust these guidelines to your cause-and-effect essay.

The United States is the most obese country in North America with about 36% of population having a body mass index of more than 30.0 [statistic]. Largely, this situation is caused by choices we make in their everyday life [clarification of focus]. Many suffer from obesity in the US [effect], because they watch too many commercials [cause 1], buy cheap fast food [cause 2], and play too many video games [cause 3].

Watching too many commercials contributes to obesity in the US because viewers believe adds and buy foods that are actually bad for their health [topic sentence 1]. Commercials influence decision-making. Many consumers decide to buy products just because they saw them on TV, without considering effects these products have on health [evidence 1]. Given that commercials promote foods that contain too much sugar, tend to make unhealthy food choices when they blindly listen to commercials [evidence 2]. Unfortunately, modern ads are so convincing that it is hard to ignore them, which aggravates problem of obesity [concluding sentence].

Cheap fast food consumption is another factor that contributes to obesity [topic sentence 2]. It is easier to get fast food because it is cheap and available. [evidence 1]. People can buy it roughly everywhere. Still, fast food causes obesity because it contains fats that are not good for health [evidence 2]. The more people prioritize fast food over healthy diet, the more obese they become, especially if their lifestyles are not active enough [concluding sentence and transition].

Because people play too many video games, their lifestyle becomes sedentary, and they gain even more weight [topic sentence 3]. Video games attract many people, who already have extra weight. It is easier to watch avatar on screen than to participate in sports [evidence 1]. Eventually, video games consume much time, leaving no room for active sports, and this makes people more obese [evidence 2]. Lack of physical ability only contributes to weight-related problems [concluding sentence].

If people in the US did not buy unhealthy products promoted in commercials, consumed less fast food, and spent less time playing video games, they would get rid of problem of obesity [restatement of thesis statement].

Climate change is a modern plague [bold opinion]. It has plenty of negative effects, some of which are particularly disturbing [clarification of focus]. Climate change [cause] leads to the sea level rise [effect 1], contributes to extinction of species [effect 2], and negatively affects health [effect 3].

A Good Deal of Advice

If you are too constrained in time because of busy curriculum, EduBirdie writers are ready to help you. EduBirdie is a special platform. Unlike other companies, it has a bidding system and allows you to choose writer you want on your own. You can also choose price that is most acceptable for you among many bids you will get after placing an order. So get your original cause and effect essay and try all benefits of EduBirdie.

Get help with essay