Trends In Employee Salaries According To Degree

It's not a surprise that many college students and graduates expect quite high salaries at the beginning of their careers. However, the reality they face is usually quite harsh and disappointing. According to the recent research conducted, college and university students expect to receive approximately $60,000/year on average. National Association of Colleges and Employers reports college and university graduates will receive about $50,000/year during the first 5 years of their professional experience in a better-case scenario.

We can definitely see how unprepared many students are when it comes to entering the workforce. Although such statistics are not too promising, there is enough data to suggest positive tendencies in the workforce. At EduBirdie, we have analyzed the current trends of higher education, affecting workers' salaries, so let's go over everything in detail.

It is commonly believed that Master's degree graduates tend to receive higher salaries post-graduation than their colleagues with lower levels of education. However, a diploma in itself is not enough to guarantee high compensations. Over recent years, the number of students awarded a Master's degree has increased, which results in a higher competition among the applicants. For example, the starting salary for a computer science Master's graduate is just below $80,000 on average and that for business graduates is approximately $75,000, and the mid-career average for the latter is higher. Math & science and engineering graduates' starting salaries average at about $79,717 and $77,298, respectively. 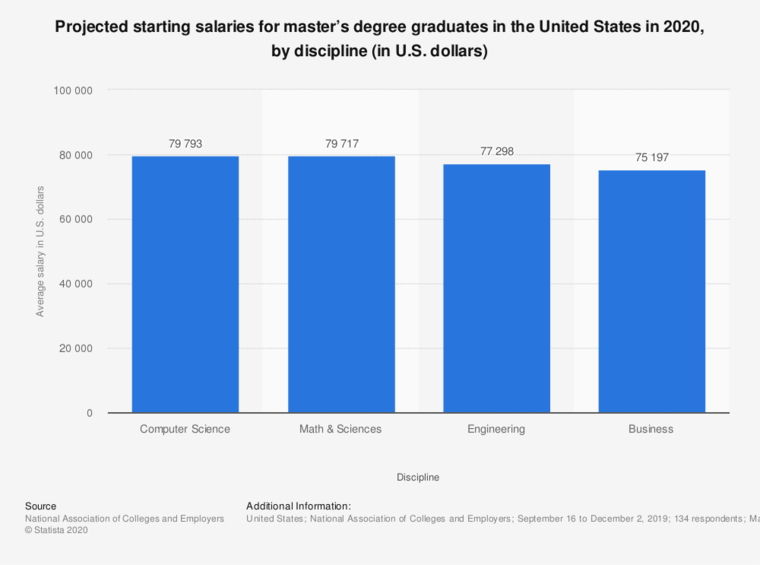 We have already mentioned that students expect their first salaries to be higher than they actually are. The comparison between students' expectations and the harsh reality may be quite shocking to some of the recent graduates and current students. Depending on the school and major, graduates may receive about 70% of what they hope for.

We should also mention that not every recent college graduate is able to land a position right away. EduBirdie learned that between December 2018 and December 2019, the unemployment rate of recent college graduates in the United States remained pretty stable. In December 2018, 3.7% of recent graduates were unemployed, and the percentage remained the same until July 2019. Between July and October 2019, the rate increased up to 4% and then decreased slightly to 3.9% in November and December of 2019. Because of this, we can suggest that landing a position after graduation is enough of an achievement, even if your first paycheck is lower than you wanted it to be. 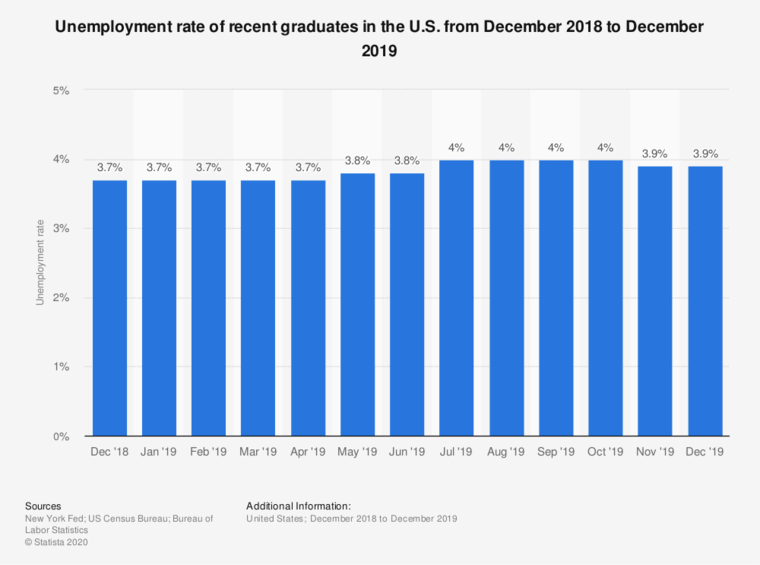 With the ongoing pandemic and economic crisis, many people have lost their jobs. As a result, the most recent data suggests the drastic increase in unemployment rates in the United States when compared to the same time last year. Back in April 2019, the unemployment rates in the US were equal to 3.6%. With the adjustment to seasonal trends and the removal of the seasonal component of the statistics, it is evident that the rates remained relatively stable in the following months.

However, since the quarantine started early in 2020, the rates increased to 4.4% in March 2020 and went as high as 14.7% in April of the same year. The most recent data suggests that the unemployment rates dropped slightly to 13.3% in May 2020, which is a positive sign. Considering the uncertainty of the economic situation in the US at the moment, it is hard to predict the future of the workforce. It is also worth mentioning that leisure and hospitality unemployment rates tend to increase off-season, and each state shows different tendencies. With such trends in the workforce, EduBirdie can assume that for many recent graduates, it will be harder to get a job, leave alone the one that meets their salary expectations. 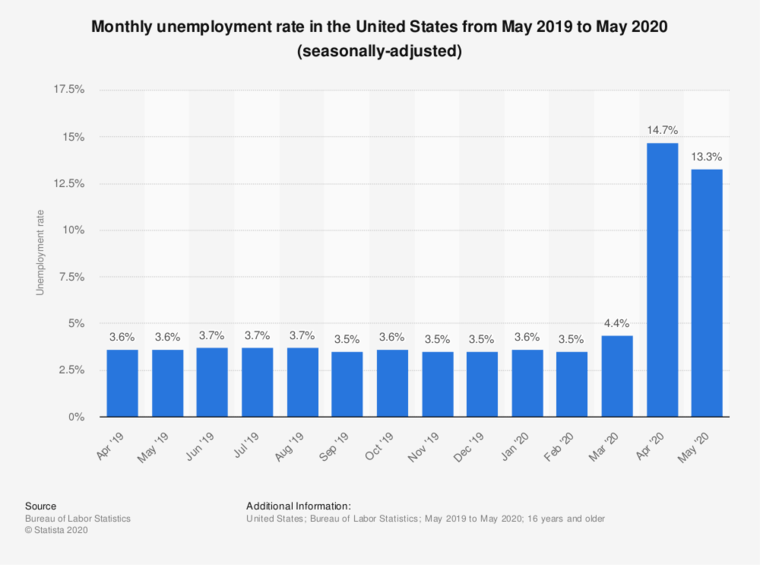 Considering how many college graduates are there at the moment, it is reasonable to suggest that the competition of landing a job after college is higher than ever before, even with a college-related jobs like essay writers. More than that, the employers will probably tend to choose candidates with a history of internships or research related to a specific position. This may suggest a question of whether or not receiving a bachelor's degree will greatly affect one's chances of employment and high early-career salary. 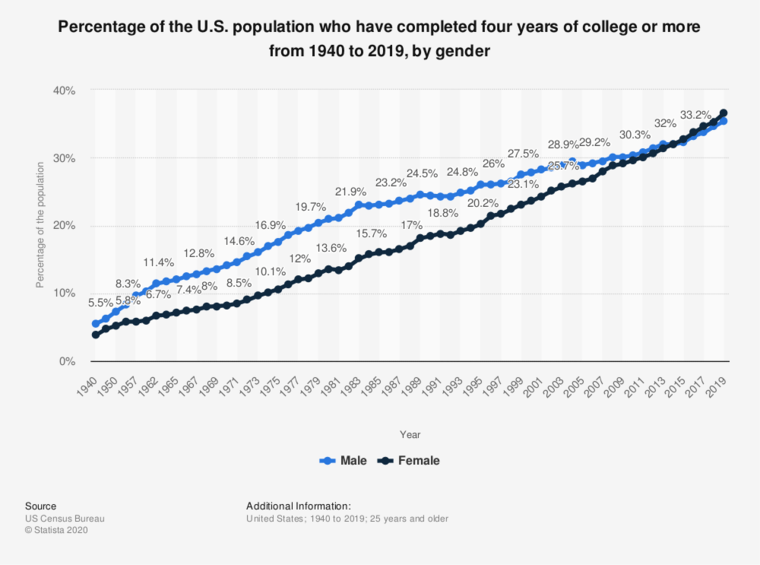 Who Makes Less Than The Minimum Wage? 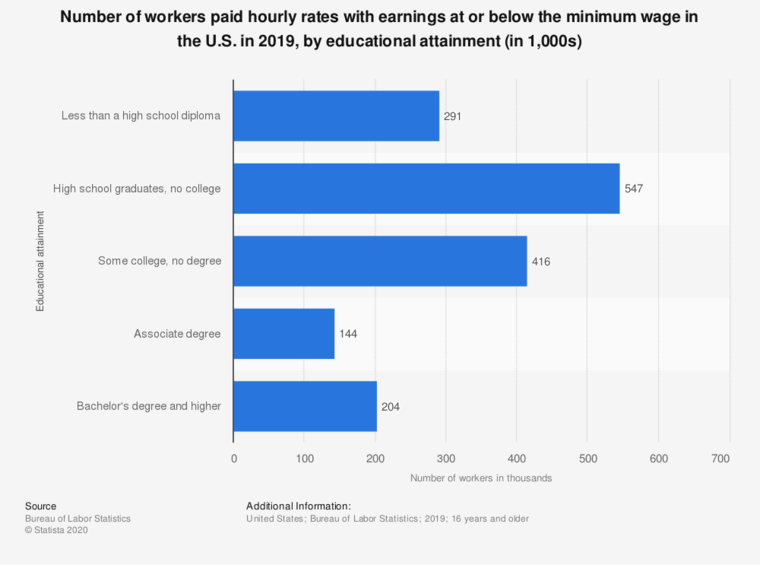 Does College Pay Back?

With all of this in mind, you might start to wonder whether college is even worth it these days. EduBirdie learned that the cost of college attendance and outstanding student debt has increased since the early 2000s. Back in 2000, the difference between weekly incomes of full-time employed high school and college graduates was approximately $380 ($503 vs. $886). In 2020, the discrepancy is more significant, peaking at over 600$, which makes the college graduates' weekly income almost twice as high as that of high school graduates ($1,385 vs. $768).

This can suggest that going to college may help you get a higher-paying job. However, when it comes to accumulating wealth, way more factors come into play, and luck is definitely one of them. As a result, the college wealth premium is declining, which is why it is important to analyze the rising tuition costs and how they later affect the economic well-being of the US population.

In the academic year 2019/2020, many of the Associate's Degree Positions' salaries were comparable with those requiring a Bachelor's degree or higher. At the moment, the highest-paying Associate's degree is Physician Assistant Studies with the mid-career salaries averaging at $98,000. Other positions compensating at over $90,000/year are in Radiation Therapy ($93,300) and Software Engineering ($90,700). Project Management, Computer Science, Fire Protection Engineering, Instrumentation Technology, Instrumentation & Control, Biomedical Engineering, and Construction Project Management are among the highest-paying Associate's Degrees with mid-career salaries ranging between $89,300 and $80,600. As such, a professional with an Associate's Degree and at least 10 years of professional experience is able to receive the compensation compatible to that of the holder of a higher degree. 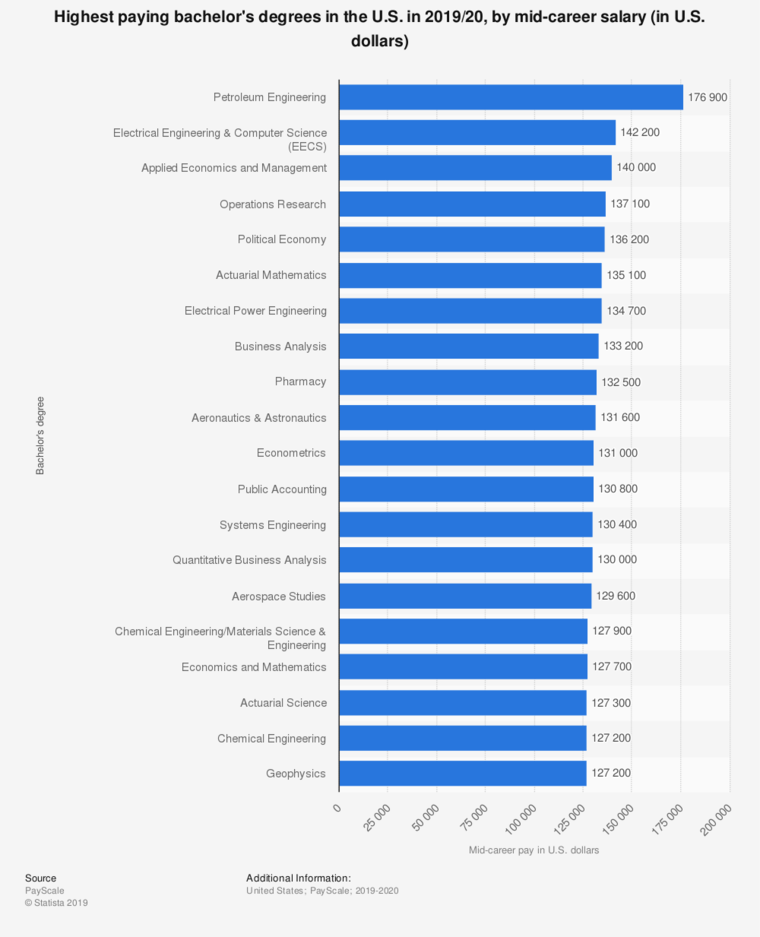 It is commonly believed that the highest-earning specialists are graduates from well-known Ivy League Schools; however, such is not necessarily true. While many of the Harvard and Princeton graduates are among the highest earners in the United States, the majority of their counterparts come from small private and public schools focusing on STEM programs. At the same time, it is worth mentioning that colleges and universities focusing on liberal arts should not necessarily be discredited as if they provide their graduates with lower earning potential purely because of the school's curriculum.

However, the liberal arts graduate tend to have lower starting salaries, which increase to relatively high mid-career earnings due to the nature of the workforce and skills developed over the years of studies. Other than that, schools providing their alumni with military experience as well as the Bachelor's degree increase their potential worth to the employees; such is true for West Point and Navy Academy.

Recently, a report with the top US higher education institutions based on alumni early-career salaries was published.

Considering the variety of schools on the list, it is reasonable to suggest that a college's specialization, reputation, and history does not necessarily define the alumni's early-career salary. In turn, the compensation depends primarily on the major, with the advantage being on STEM rather than the liberal arts.

When it comes to receiving a bachelor's degree, many students are convinced that STEM majors tend to receive higher salaries than their liberal arts counterparts. While this may be true for early-career salaries, we should also mention that in many cases, liberal arts major graduates receive relatively equal compensations after 5-10 years of experience. Such can be related to the variety of skills obtained in school. Nevertheless, the highest-paying positions usually tend to be in business and engineering. It is possible to assume that such is related to the high demand for such jobs in the workforce and the high level of expertise required.

For many college and university students, their expectations of the early career salaries are rarely met, regardless of the degree. With the increasing number of degree holders and increasing competition in the workforce, it may be unclear whether or not the college will be worth the hustle in the future. Such is a direct result of increasing college attendance costs and outstanding debt per college graduate, as well as a variety of factors affecting one's ability to accumulate wealth.

Although the highest-paying early-career jobs tend to be related to the STEM field, liberal arts degree holders receive high mid-career compensations as a result of the curriculum peculiarities. The reality of college education worth and value and job compensation should be more transparent to students, especially in the context of increasing unemployment rates in the United States. All in all, while a degree can help you get a higher-paying job, it is not a guarantee.