Finland Breaks The Rules: How Does Finland’s Education System Work?

The US constantly strives to be the best in its education system, hoping to boost the performance of its students worldwide. But unfortunately, the actual data show that all these attempts remain fruitless. At best, the US takes places in the middle of the list, with numerous other countries outranking it on a constant basis. Finland, in particular, shows excellent results, to the surprise of many Americans.

According to PISA, which stands for Program for International Student Assessment, there are three major spheres that are studied to determine the educational performance of various countries. They include Science, Math, and Reading, and Finland takes its rightful place among the top education-efficient nations in each of them.

For instance, based on the results of the 2012 PISA test, in Science, it took 5th place in comparison to the US, which received only 28th one. In Math, Finland was 12th and America was 36th, and in regard to Reading, Finland was 6th while the US was 24th.

And that was not a limit. Finland continues to occupy the highest ranks according to the results of the newest 2015 PISA test. In Science, the country remained on the 5th place in comparison to the US, which received 24th one. In Math, Finland went up on the 11th and America on the 39th place, and in regard to Reading, Finland is now on the 4th while the US remained on the 24th.

The difference is startling, and it may be explained by efficient smart reforms Finland has implemented in its system of education that were introduced during 2012-2016. It cultivated individualism, encouraged actual critical thinking. The reform concerned national goals and objectives, distribution of lesson hours, national core curricula, and local curricula, pre-primary education, basic education, the 10th voluntary year for basic education and upper secondary education. If America wants to finally start succeeding, it has to consider emulating at least some of these reforms.

The results of the 2018 PISA test will be announced on the 3d December in 2019. It will be interesting to see the rating of the countries and how it changed over the last 3 years. Over half a million 15-year-olds from 80 countries and economies took the PISA test in 2018. They were tested in reading, mathematics and science with a focus on reading. In addition, students in some countries took tests on financial literacy and on global competence. 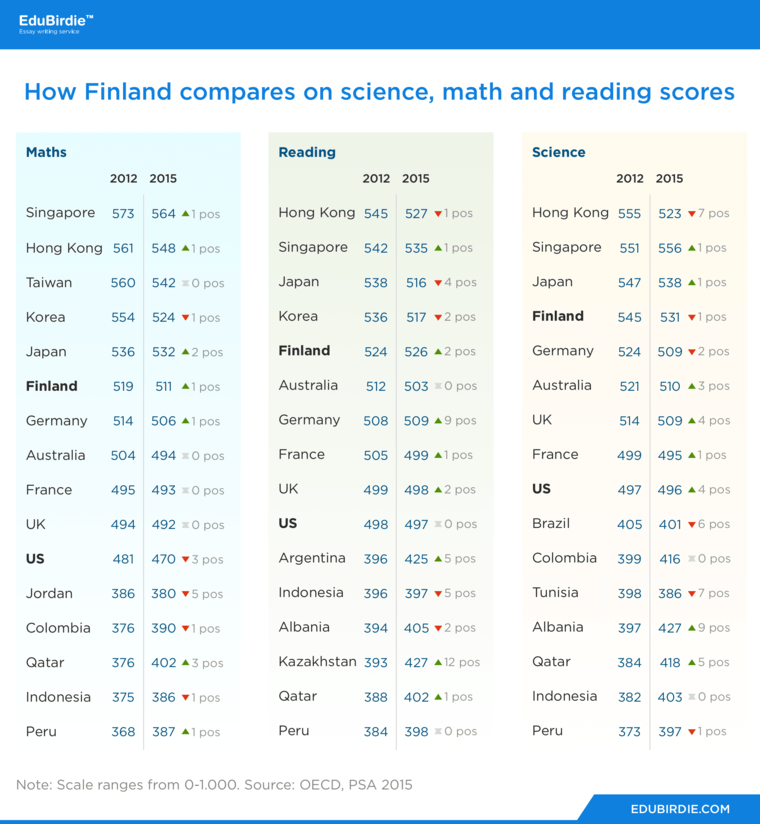 For a country of Finland’s size and capabilities, such educational progress is astonishing. This fact continues to amaze numerous Americans, but funnily, it’s all very simple. There are seven top reasons explaining Finland’s success that were examined by EduBirdie experts.

The first innovative decision Finland has made lies in removing all forms of standardized testing from its schools. As an American, do you remember yourself as a student? Ask your parents about their experience and you’ll see that there are very similar, even though so many years have passed between different generations. The tense and anxious atmosphere, with students focusing on identical pieces of paper with identical tests and trying to recall everything they have memorized. A teacher who raises her or his head occasionally, watching so no one would copy from one another. We recall these moments with fondness, but in reality, they are the example of a failing education system.

Finland has no standardized testing. Sure, students are still graded, but such grading is far from being the focus of studies. Tests are approached individually, with teachers being responsible for developing a most fitting grading system for their students. At the same time, there are general guidelines that allow equalizing education, meaning that no matter where a child is from, he or she will get the same knowledge level. Students focus on understanding and analyzing information, not simply memorizing it to forget it as soon as test ends. Such an approach is more complicated but it’s clear why its uniqueness works so well.

America likes to fuel competition among students, thinking it will help them show the best results. But as practice demonstrates, it only leads to breakdowns, arguments, and depression. In Finland, educators focus on teamwork. Students are taught how to cooperate and show their individual strength in areas they are personally good at helping their team succeeds instead of trying to master all possible disciplines to exceed each other’s performance rates.

Unlike in America, in Finland, children go to school when they are 7. It allows them to mature and develop gradually instead of being subjected to fierce education pressure every month of their life since after passing the toddler stage. They also have to study only for 9 years, meaning they have more freedom, which is essential for progress.

No tutors. No endless hours spent on doing homework. And yet, Finland continues to outperform the US. Students manage to receive all the knowledge they need at school. Everything else is a mere addition, meaning that they have free time for doing personal things and discovering their individual strengths. Eventually, it helps them focus on lessons because they aren’t overwhelmed by information dumping. Although the amount of home tasks is limited, there are strict submission rules. So, it is important to check for plagiarism in all written assignments.

Finnish teachers tend to stay the same throughout all years of students’ studies unlike in America, where they change yearly. It creates a foundation of trust and understanding necessary for efficient results. Teachers know students personally and help them develop their individual skills, choosing the most effective teaching techniques instead of mindless rebukes.

In America, students study for the majority of their lives, moving from pre-school to school, college, uni, trying to get undergraduate, Bachelor, Master’s, Doctoral degrees, etc. In Finland, such stressful chase doesn’t exist. There is special vocational education that allows preparing for specific specialties students are interested in. They go to university only if they want, there is no pressure. Such encouragement of individualism assists in Finnish success on the international educational arena.

Only teachers with a Master’s degree can become educators in Finland. There is the strict procedure of their selection unlike in America, where in many cases, anyone willing with at least a semblance of education can be accepted. That’s why only the best from the best are picked, which creates stability as well as sufficient educational level. They should help write an essay, teach how to edit texts and what sources are credible and reliable.

There are four categories into which the Finnish education system is divided. The simplicity of it is yet another reason contributing to the international success of students coming from this country. The fact that most forms of it are free to relieve students from their burden of endless debts.

Maternity leave allows the majority of parents to stay with their children until they are old enough to go to school. They can spend this time as they want, teaching their young ones in a manner they personally think is beneficial. Most importantly, there is one central program provided by the government and known as Early Childhood Education and Care. Focus here is placed on playing and teaching children skills through games. It’s an entertaining and efficient technique.  Sure, in America, you can also enroll your kid into a similar place, but it’ll be extremely expensive. In Finland, price is determined by income and number of children. It allows about 82% of folks to enroll their kids.

It starts as children turn 7, and through the next 9 years, they will be studying based on one standard education structure that is altered individually by specific schools. No divisions into junior and elementary groups create a sense of unity. Schools also provide a free meal, which is another advantage showing the lack of commercial culture in this country.

In Finland, this education is chosen by the students themselves. They might decide against continuing their studies and it’d be regarded as perfectly normal. There are general and vocational directions that allow students to determine their possible future, each taking about three years to complete.  Those who are confident about what they want choose the latter and those who are still deciding pick the former. They may change their mind at any second unlike in the US, where one wrong decision can make you stuck in the field you hate with a passion.

Each student can access this more advanced form of education by going either to general universities or those of applied sciences. Again, they might decide against it and they will still find jobs easily. Education in Finland is all about personal preferences and choices. There is also adult education that allows adults to enter a uni whenever they want, which further emphasizes equality.

Are There Any Disadvantages?

Many critics do approve the last modifications of the Finnish education and reforms in general. They think that students who will go to higher educational establishments, especially abroad, will face problems due to the absence of efficient teachers, modified syllabus and complete coursework. It will be difficult to get adjusted to the new environment and may even lead to lower scores and lack of motivation to study.

A Lesson for the US

So, Finland rightfully outranks America in terms of education, and as you can see, there are plenty of reasons for that. What the US has to do is admit its flaws and change its education outlook entirely. It’s important to follow proven successful trends instead of sticking to those that bring no positive results. Only this way, American students can flourish, turning into driven young people motivated by personal professional interest and skills instead of vague panicked ideas of getting any possible degree to avoid being left behind.

That is not to say that Finland is entirely flawless in its system of education. It has numerous disadvantages as well, such as unfairness, preference of some students over others by teachers, which results in divisions and damaged self-esteem, and so on. Nobody is perfect so just like the US, Finland should continue working on its reforms, changing them and improving the situation with education for everyone. The US, in turn, has some positive traits that could be emulated. All in all, it’s clear that cooperation is essential not only for students but for countries where they are from as well. Only through it, it’s possible to achieve an excellent education system.