Students’ Plans for the First Summer Free of COVID Cancellations

Summer is the time of vacations, college breaks, and great fun for many people. This year is very special for many of us. It is the first summer free of COVID cancellations that lasted for two years. So how are we going to spend it? EduBirdie wanted to figure that out!

We reached out to students who told us what they are going to do this summer. This way, we figured out four most common categories, such as: travel plans, sports events, music festivals, and personal development. As SEO experts, we used Google searches to get some insight there. Let’s find out more!

The data was collected in May 2022. We reached out to students who told us what they are planning to do during the summer with no COVID cancellations. It helped us define 4 main points of interest: traveling, sports, music festivals, self-development.

We used SemRush and Google Trends to analyze the top Google search requests for this summer. For each studied point of interest, we highlighted related search queries that had the largest volume. Google queries were grouped with alternative spellings. This means that Mexico as a travel destination included queries for both “flights to mexico” and “cheap tickets to mexico” as well as other high volume related Google queries. We then compared the overall popularity of a query group in every region to determine what interests the representatives of a certain state.

What are the most common summer plans? 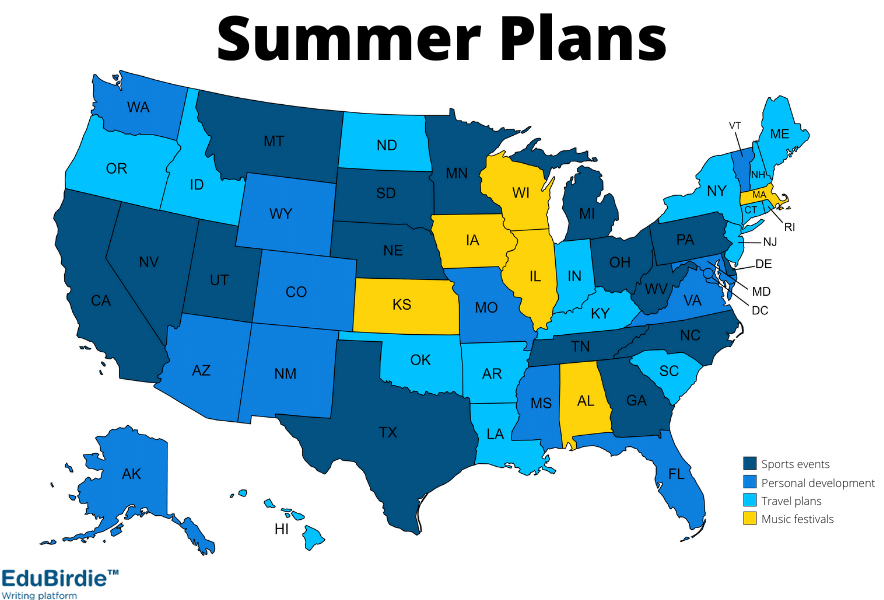 According to the collected data, sports events and travel were the most popular plans for the summer. Both these requests were the top ones in 16 states each. Personal development was the main interest for people in 12 states. Music festivals were on top in 6 states, mainly the ones hosting such events or the neighboring ones such as Illinois, Wisconsin, Iowa, Kansas, Alabama and Massachusetts. 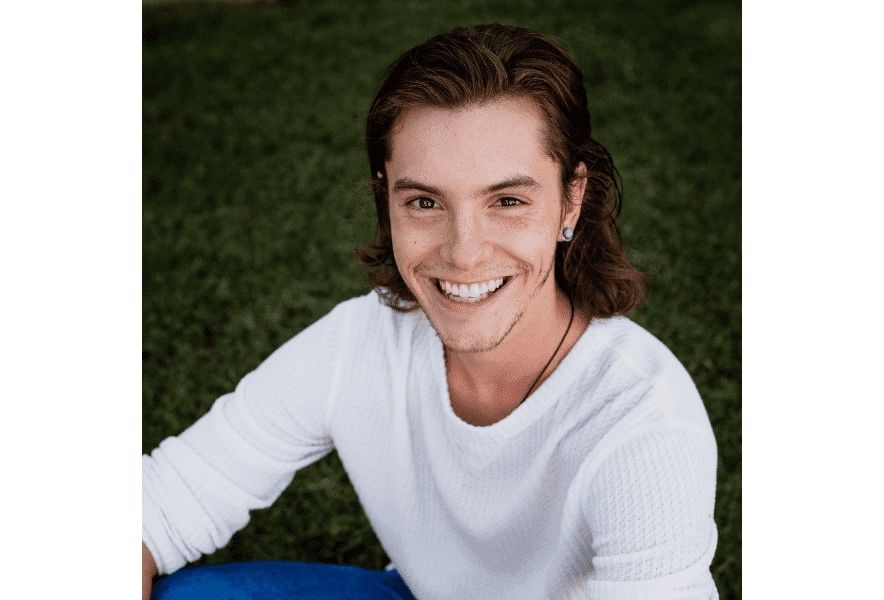 I'm looking forward to spending this summer overseas in London. One of my friends has been inviting me to stay with them for some time (and due to COVID, I was never able). After two years, the restrictions are finally lifted enough for me to make the journey
Camden Benoit, a college student 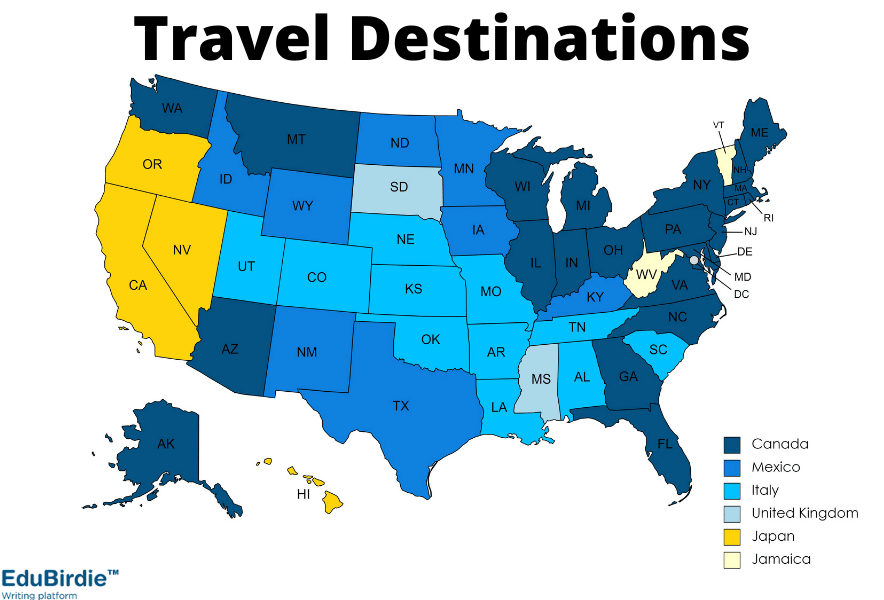 We looked into the most popular travel destinations people from the US were Googling. Canada and Mexico were the most popular ones. European countries, especially Italy and the United Kingdom were also popular, and some states chose Japan and Jamaica as their destinations. We may presume people often choose travel destinations based on their location. This way, people from the northen states were mostly looking for Canada flights and people from the southern states such as Texas and New Mexico were more interested in Mexico trips. People from Hawaii, California, Oregon and Nevada, who live closer to Japan were more likely to Google tickets there. 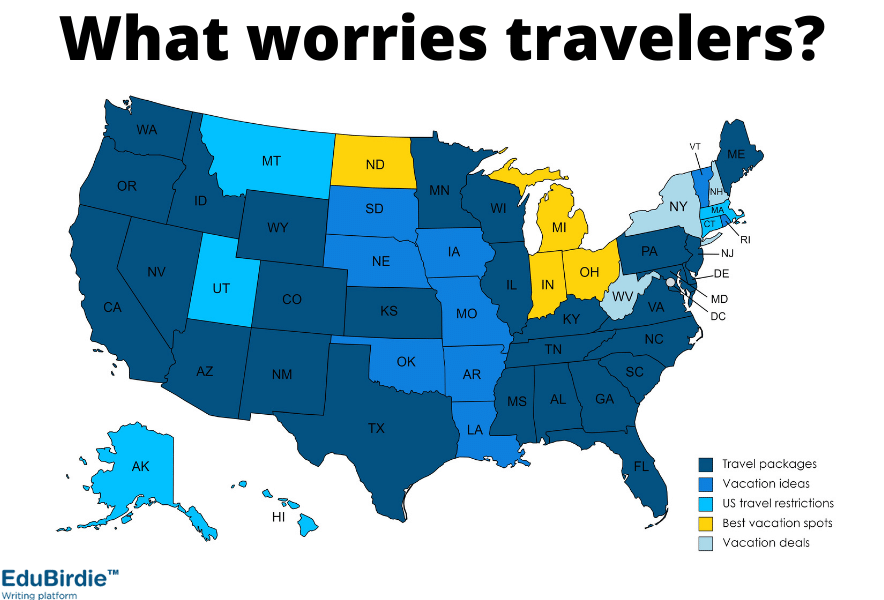 As COVID pandemic had a huge impact on the way we travel, people were looking for answers to the questions that worried them. Most people were looking for travel packages. We may presume people who plan on traveling don’t want to struggle with booking and route making but just enjoy exploring the world this first post-COVID summer.

In some states, like Alaska, Hawaii, Utah, Montana, Connecticut and Massachusetts, the main worry was US travel restrictions. In New York, West Virginia and New Hampshire people were mostly looking for travel deals. And the rest of the states were mainly thinking about the best spots and ideas for their vacations. 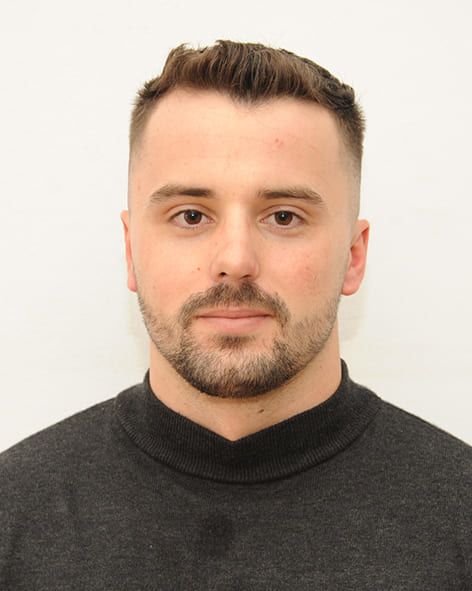 I'm planning to spend my first summer post-COVID pretty actively. I will be able to attend the Grand Slam Tennis Tours. This tennis championship was originally planned for last year but was postponed due to the pandemic
Maringlen, a student for a Master's Program at the Management University of East Westphalia-Lippe and also a professional tennis player and owner of Tennis Racket Ball 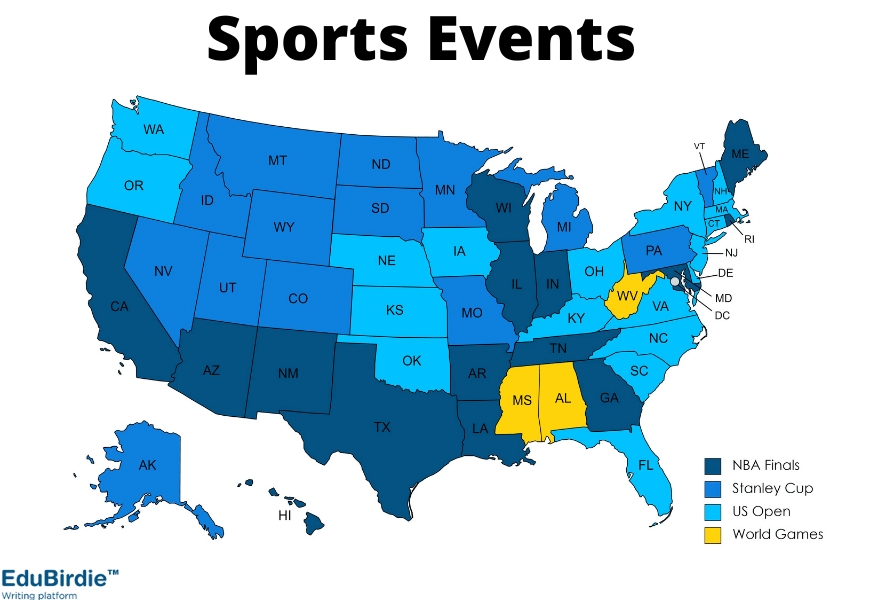 Among all the sports events, the NBA is the most popular one in the US. In fact, the request for the NBA draft was so huge it is hard even to compare with something else. So we decided to compare the NBA finals with the other sports events this summer.

Mostly, the NBA Finals were popular in California that hosts it and closest states - Arizona, New Mexico, Texas and others. Stanley Cup was the most interesting event for people from states bordering with Canada as the tournament has returned to its usual two conference alignment after pandemic restrictions. The US open was the top one sports event in Massachusetts where it is going to take place this year. Also, neighboring eastern states were mostly interested in it. The World Games were the least popular event compared to others and was mostly searched in hosting Alabama, Mississippi and West Virginia. 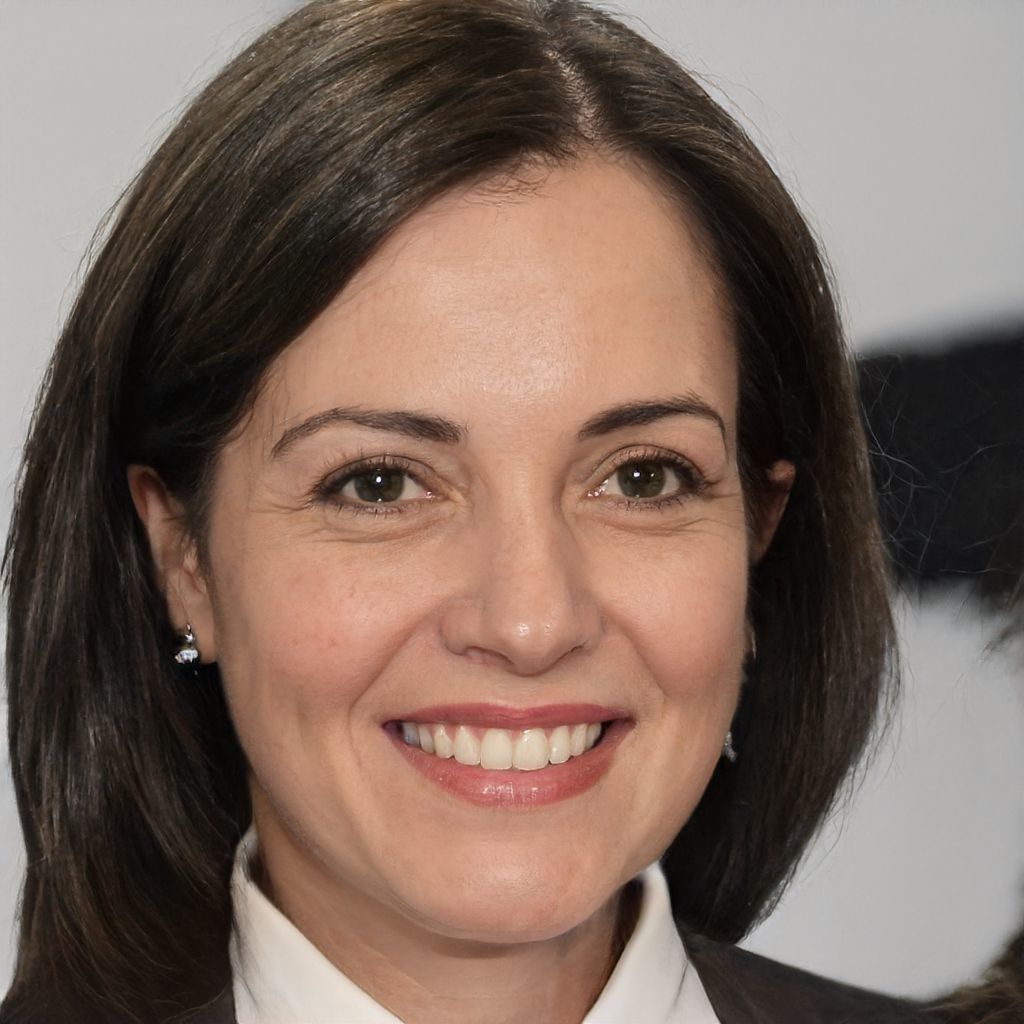 I'm returning to my birthplace to see relatives and attend a four-day musical festival. I would have done the same thing months ago without the coronavirus outbreak
Emma Gordon 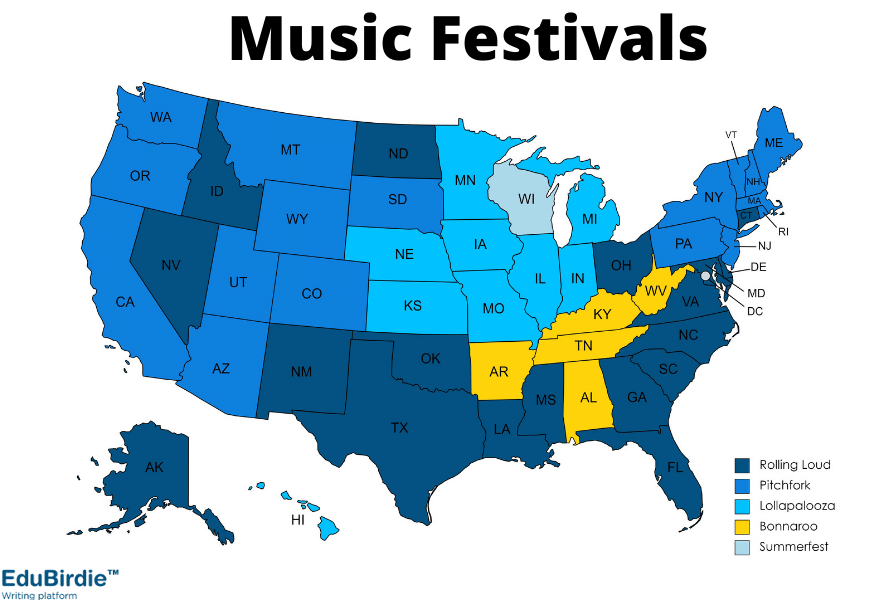 The 5 most popular summer music festivals in the United States were Bonnaroo, Summerfest, Pitchfork, Rolling Loud and Lollapalooza.

According to requests analysis, Rolling Loud is the most popular festival in the United States. The least popular festival is Summerfest who was on top only in Wisconsin. The most requests came from the states where these festivals are going to perform. They are Tennessee for Bonnaroo, Wisconsin for Summerfest, Florida for Rolling Loud and Illinois for both Pitchfork and Lollapalooza. We may say, Lollapalooza was more popular than Pitchfork in Illinois - state hosting both festivals. The neighboring states are also among the top fans of music festivals.

“My post-COVID plan is volunteering for local organisations. This summer, we are expecting many children in local summer camps and I am happy to be there for them and show them our city" - Mary-Ann, a student of Washington University. 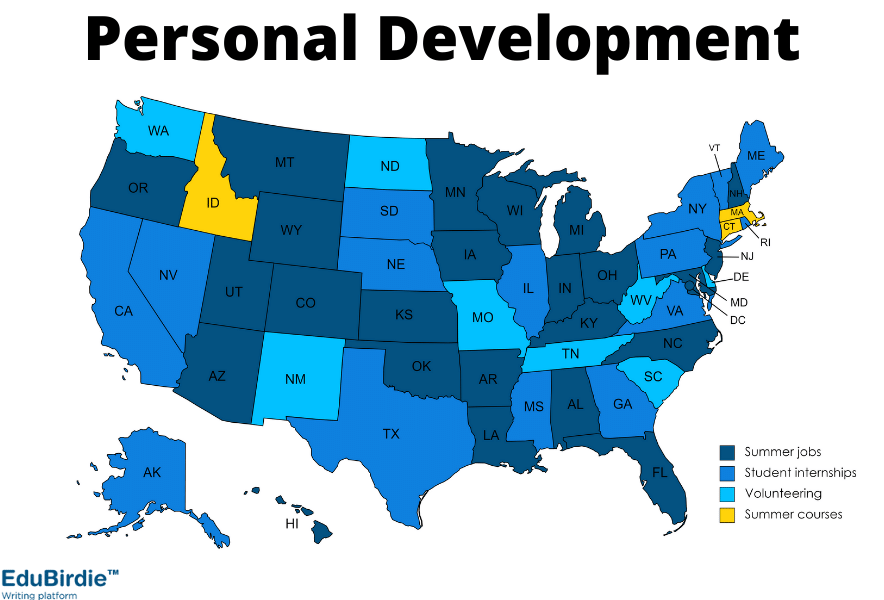 The other great idea for students to spend the summer is personal development, ongoing education and working during the summer break.

Among the four most popular requests in this category, summer jobs were mostly searched. It was the top request in 24 states. People from 15 states were interested in internships the most. And volunteering was the top interest for people from 8 states. Summer courses were the most popular in three states - Idaho, Connecticut and Massachusetts.