The World’s Richest People Who Did Not Complete Their Education 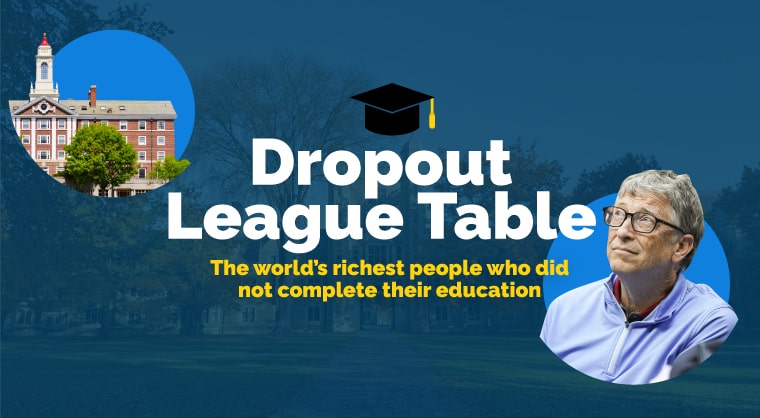 Education is an incredibly important element in the development of human beings. From birth to death we all learn every day. Organized education is equally important in development as you learn skills that can help you in later life. Moreover, qualifications earned from education centers such as schools and universities can open many doors for employment and subsequent financial gain.

However, organized education is not for everyone and some of the most successful individuals in history did not attend or dropped out of school. To determine which drop-outs have earned the greatest success we have discovered the net worths of notable figures who did not complete their education, to present the ultimate drop-out rich list.

The most financially successful dropout is currently Microsoft founder Bill Gates. Gates actually dropped out of Harvard University twice both times to focus on his burgeoning software company, and this was certainly the correct decision as today Microsoft is worth over $300 billion.

Another Havard drop-out comes in second place in the rankings, Facebook founder Mark Zuckerberg left the prestigious college in 2005 to focus on growing his company. The social media behemoth that Facebook has become was started whilst Zuckerberg was a student, so his time at Harvard was not wasted.

Dropped out of the University of Michigan

Google co-founder Larry Page did graduate university but counts as a drop-out as he failed to complete his studies for a Ph.D. Alphabet Inc (Google’s parent company) is estimated to be worth over $220 billion, so Page’s own worth is just over half of the value of the company he founded.

Dropped out of the University of Illinois

The fourth man on this list to have made most of his money in tech is also one of only four drop-outs to have an estimated worth of over $100 billion. Larry Ellison did not graduate from the University of Chicago but has gone on to make billions and have a Hawaiian island named after him.

Dropped out of school

The highest-ranked non-American on the list is Spanish retail magnate Amancio Ortega. Ortega left school at fourteen and thirteen years later opened his first Zara store. Since then the fashion company has grown and in doing so made Ortega the richest man in Spain.

Dropped out of the University of Texas

Founder of the technology company that bears his name, Michael Dell founded his company in the 1980s after dropping out of the University of Texas when he was nineteen. He is currently worth just under $50 billion, making him the sixth richest drop-out.

Dropped out of school

The 30th richest person in the world is also the seventh-highest ranking drop-out in terms of wealth. Hong Kong businessman Shing was forced to leave school early at fifteen following his father’s death, since then he has not looked back and is now one of the richest drop-outs in the world.

A second co-founder of Facebook makes an appearance in the top ten of the drop-out rich list, Dustin Moskovitz was roommates with Mark Zuckerberg at Harvard and the pair both dropped out of the University. Moskowitz left the company to found Asana in 2008 but still owns a 2.34% stake in Facebook, in 2011 Forbes labeled him as the youngest billionaire in history.

Dropped out of the Missouri University of Science and Technology

From one titan of social media to another, Twitter co-founder and CEO Jack Dorsey dropped out of the Missouri University of Science and Technology. Since its startup fifteen years ago Twitter has grown massively with 330 million active users, in the process Dorsey has become a multi-billionaire.

Dropped out of San Jose University

The tenth richest dropout is Jan Koum, the founder and CEO of WhatsApp. Koum dropped out of school at the age of 21 in 1997 as he had started working for Yahoo. He then went on to create WhatsApp which was acquired by Facebook for $19 billion in 2014, from this sale he personally earned $6.8 billion. 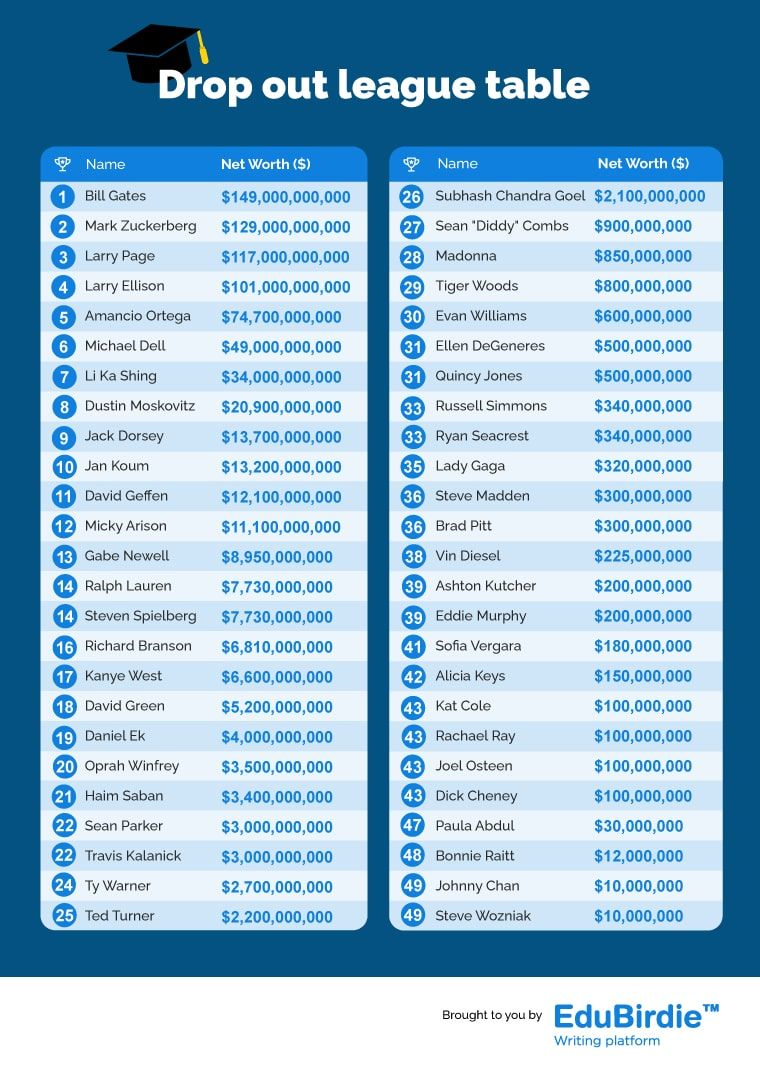 Universities with the most valuable dropouts 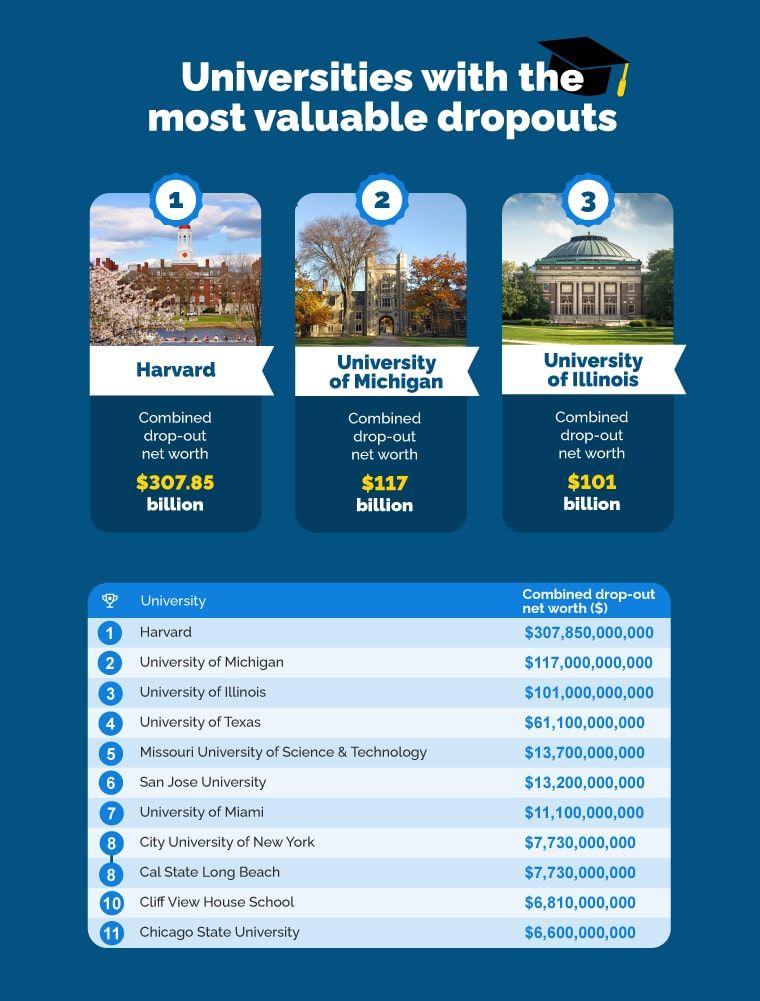 Harvard University is one of the most prestigious institutions in the world, and some of the greatest minds in recent years have passed through its walls. Although as we can see a lot of the most successful do not complete their degree, out of the top twenty richest dropouts four attended Harvard (including Bill Gates and Mark Zuckerberg). Combined these men have a wealth of over $300 billion.

Thirdly, the University of Illinois has the third highest total net worth of dropouts of over $100 billion. Although, just like Michigan it is all provided by one man, Larry Ellison. These two men who are next to each other in the rankings also dropped out of Universities in neighbouring states.

We then used the Forbes billionaires list and celebrity net worth to find out the wealth of these individuals.

To discover the schools and colleges that they dropped out of we looked at their educational histories and articles about them from various sources.