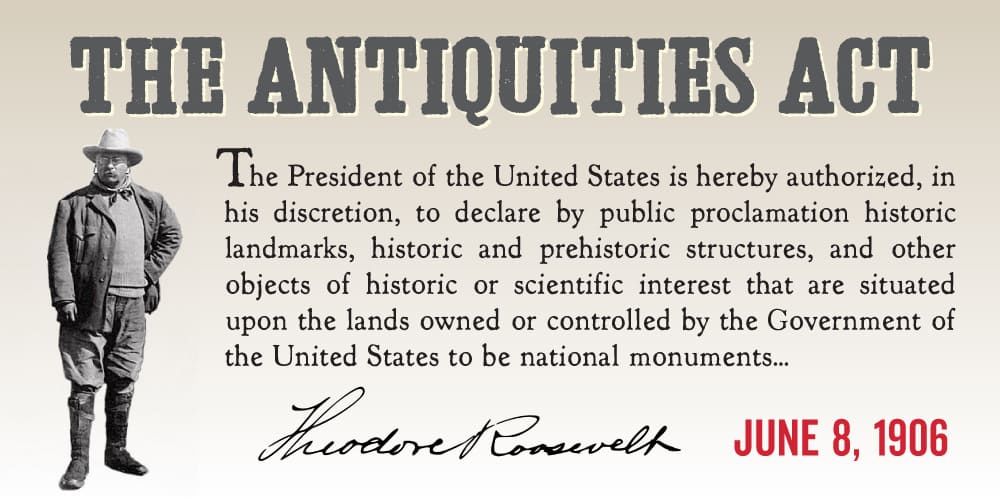 Signed into law on June 8, 1906, the Antiquities Act is our nation’s oldest law protecting historic, prehistoric, and scientific features on public lands. The Antiquities Act has enabled 17 presidents from both parties to swiftly protect historic sites and culturally important lands, ranging from the Statue of Liberty to sites associated with Cesar Chavez. By establishing new national monuments or enlarging existing ones, our leaders have been able to preserve precious places for future generations to experience and enjoy.

The Antiquities Act has been used to designate national monuments that reflect the full measure of our history. The law protects a diverse array of places, from natural wonders like Devil’s Tower to buildings like President Lincoln’s Cottage. More than 30 national parks and eight World Heritage Sites were first protected as national monuments, including the Grand Canyon.

Plus, thanks to a renewed interest in visiting national parks, national monuments give tourists and locals plenty of opportunities to explore public lands in a new way. Monuments and national parks can even help grow and diversify their communities’ economies. According to the National Park Service, 10 dollars in local economic activity is generated for every dollar of federal investment in National Parks, which includes National Park Service National Monuments, Battlefields, Historic Sites, and other designations.