The Most Popular Apps Belong to These 3 Tech Giants 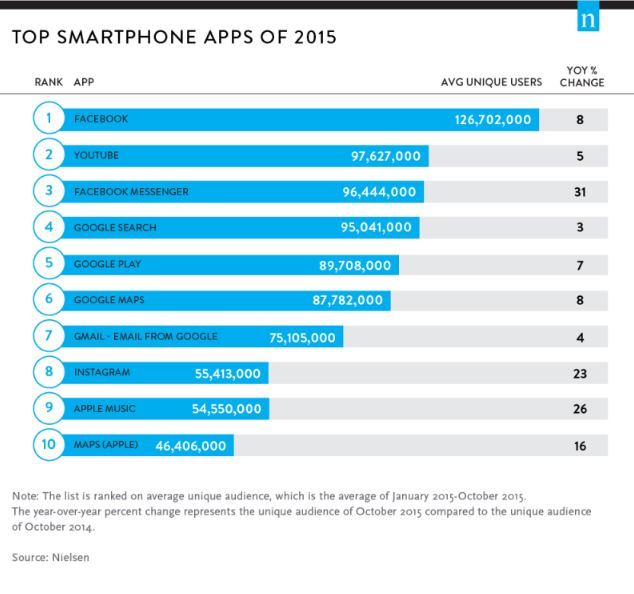 According to the report, just three companies are responsible for the 10 most used smartphone apps in the United States: Facebook, Alphabet's Google, and Apple. As people spend more time on their mobile devices, these three companies are in prime positions to capitalize on their apps' popularity and growth. But all three are taking different approaches to achieve success with their apps and to turning their popularity into profits for investors.

Facebook
Facebook is notably different from both Google and Apple, since it doesn't own a smartphone platform. Google has Android and Apple has iOS, which allows them to pre-install their own apps on users' phones, giving them an advantage.

Still, Facebook owns three apps in the top 10: its flagship app (No. 1), Messenger (No. 3), and Instagram (No. 8). In fact, the big blue app is 30% more popular than the next leading app, YouTube. Facebook's dominance in the mobile space is seen in its revenue growth. Mobile advertising revenue accounted for 78% of total ad revenue in the third quarter, up from 66% in the year-ago period.

Meanwhile, Messenger and Instagram are two of the fastest-growing apps. Messenger usage grew 31% year over year after growing 242% in 2014. It climbed up the charts to be the third most used app in the U.S., from seventh place last year, and it will probably surpass YouTube next year. This huge U.S. user base represents a big opportunity for Facebook when it comes to monetization. Early efforts in that regard are ongoing, with Facebook focusing on getting more businesses to interact with customers through the app.

Instagram is also growing rapidly, increasing usage in the U.S. 23% to 55 million unique users per month, on average, in this ranking. This is well short of Instagram's own reporting, says around 25% of its 400 million users are from the United States. Still, the continued growth in the United States bodes well for the growth of ad revenue from the photo-sharing app. The company just opened its advertising API to small businesses this summer.

Google
With the help of Android, which is installed on more than 50% of smartphones in the U.S., Google dominates the top 10 apps, with five apps within the top seven. Google's ability to pre-install apps on smartphones has led to its success with utilitarian apps Google Search (No. 4), Google Play (No. 5), Google Maps (No. 6), and Gmail (No. 7), while Google's YouTube comes in just ahead of Facebook's Messenger as the No. 2 most popular app on this list.

While Google's apps have proved very popular, user growth is missing. All five of the apps on the chart exhibit user growth in the 3%-8% range. Every other app on the chart, save Facebook (8%), exhibits double-digit growth.

Even without significant user growth, however, Google is seeing its mobile users become more engaged. It announced this year that Web searches on smartphones surpassed those on desktops and laptops. YouTube, meanwhile, told investors that total watch time on mobile doubled year over year in the second quarter.

This trend puts mounting pressure on Google to bring mobile ad prices in line with desktop ad prices. With access to more precise location data and other context from the more personal devices that are always with a person, the potential for mobile ads to outperform desktop is certainly there.

Apple
Apple finds itself taking the bottom two places on this top 10 list, with Apple Music (No. 9) and its Maps app (No. 10).

The popularity of Apple Maps is a testament to the power of default apps. Despite lacking key features such as public-transit directions and street views in most cities, it's still become much more popular than Google Maps on iOS. The benefit of having more people use Apple Maps may express itself well down the line as Apple looks to integrate its software with automobiles; it's rumored to be working on a car design of its own.

Likewise, Apple Music has seen a lot of traction, according to Nielsen, which is a product of its being baked into the default music app on iOS. While it's unlikely that 55 million people have tried the Apple subscription service -- that's the number of unique monthly visitors noted in this survey -- it's very likely they regularly open the Music app pre-installed on their iPhone. Every time they do, they're reminded about Apple Music.

Growth in Apple's Music app is also notable. The only app growing faster is Facebook's Messenger. With the launch of Apple Music, Apple saw 26% more people use its app than the year before. Messenger notched a 31% change. Apple is looking to offset declining digital-music sales with subscription music revenue.

The future in mobile
Mobile growth is key for all three of these tech giants. With Google and Facebook seeing more traffic from mobile than desktop users, maintaining their current momentum and positions in mobile is essential to their future revenue growth. Meanwhile, Apple is heavily reliant on iPhone sales for the bulk of its revenue. Maintaining popular apps and services is a surefire way to keep users from switching.