The Dark Economy. What lengths did Brits go to during the pandemic to make extra cash?

The pandemic knocked the final nail in the coffin for many high street retailers, with restaurants and entertainment venues also forced to close their doors. But how exactly has Coronavirus-19 affected employment? How have Brits kept financially afloat in such a tumultuous year?

We interviewed over 2,000 Brits to find out how the pandemic has affected jobs, and find out what ways they are making fast cash.

How has your employment status changed in the last year?

Surprisingly, 74% of Brits reported no employment change in the past year. However of those that had experienced a change, 38% found themselves furloughed, with 27% of furloughed Brits having worked in the hospitality industry. 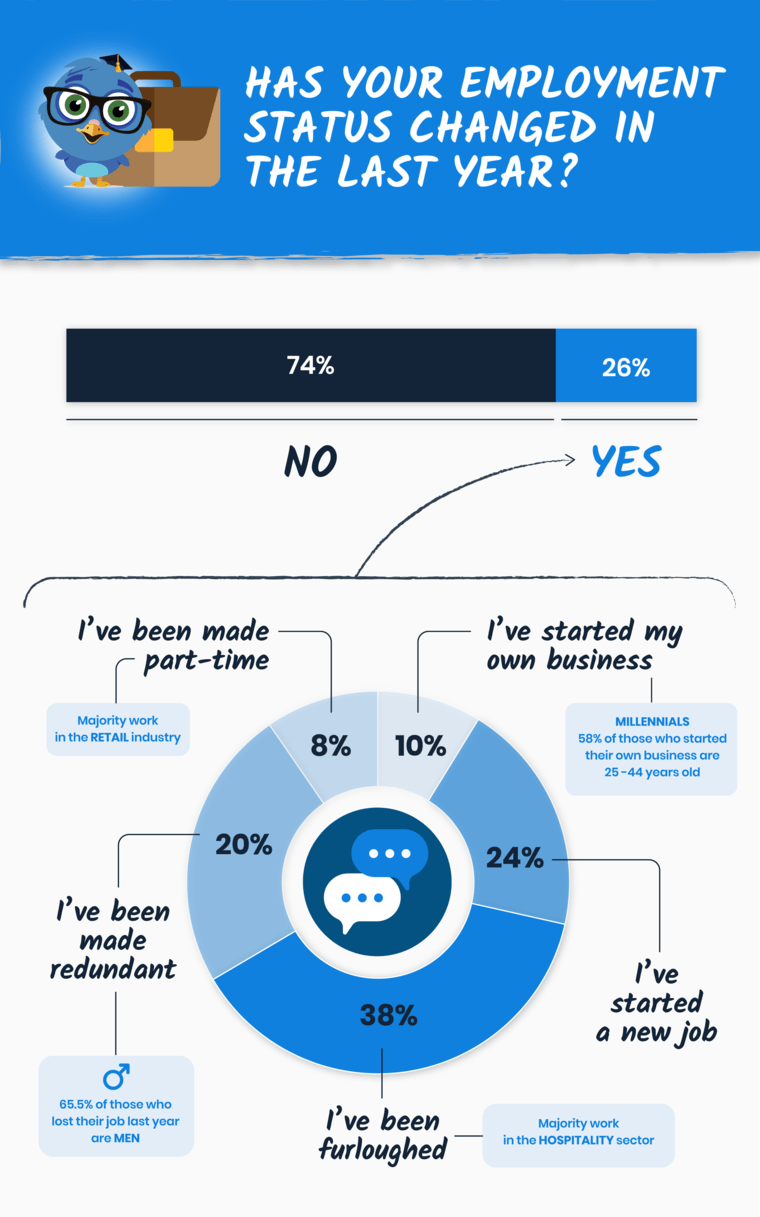 Not everyone was lucky enough to fall back on the furlough scheme. Redundancies hit the Hospitality and Travel sectors hardest. Men were more likely to be made redundant (65.5% of those made redundant were male) and 10% of people aged 55-64 lost their jobs.

With many people finding themselves without a job, furloughed, or simply bored at home, what ‘alternative jobs’ have Brits turned to in the pandemic to make some extra cash? 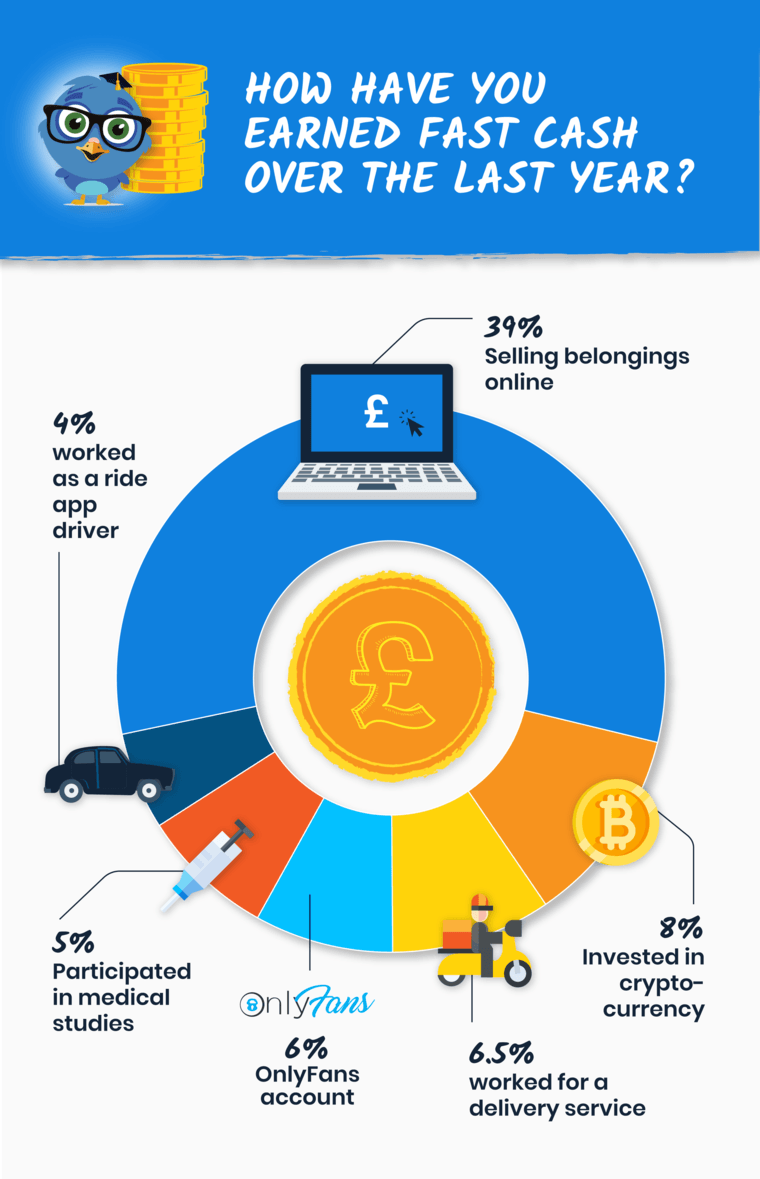 The most popular fast-cash solution in Britain? There was one winner that far out-bid the rest. 39% of those surveyed sell their belongings online to make extra cash, and in Wales, that rises to 50%. But it’s not just the Welsh who waste-not want-not, 60% of Teachers sell second-hand items online. 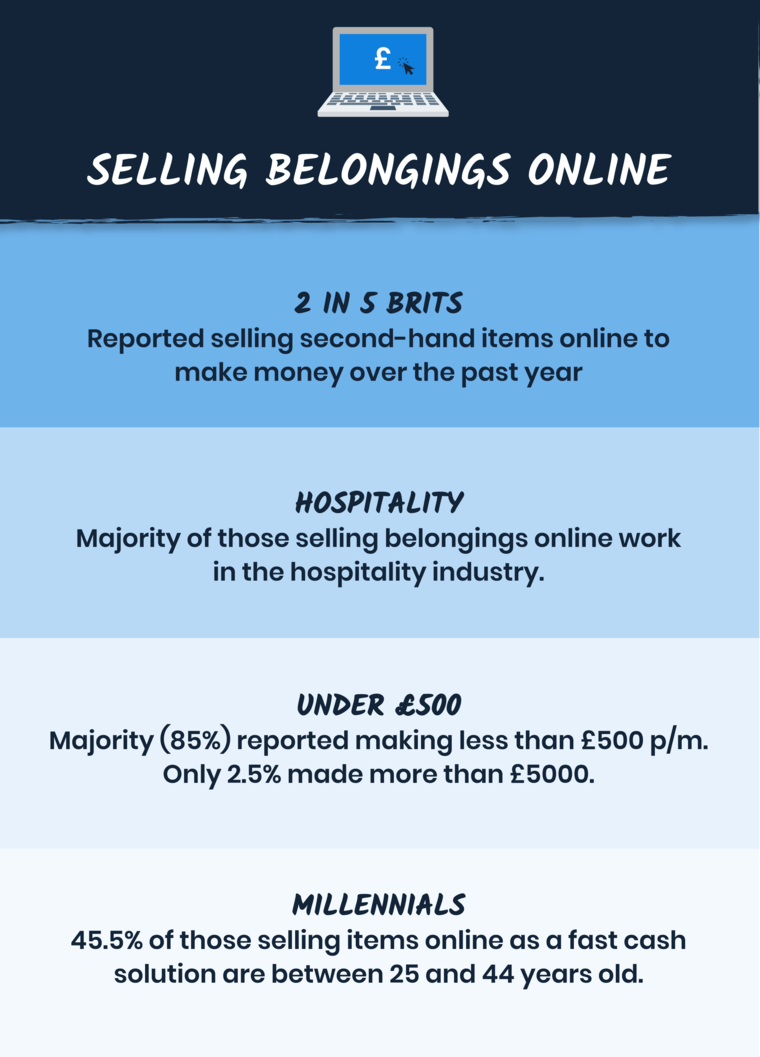 Little-Bit-Coin: Investing in Cryptocurrency trendy but not lucrative

Investing in cryptocurrency takes the title of the second most popular fast-cash solution. This is very much a male-dominated industry, as 76% of investors are men. Are women missing out on much? Not really. Don’t believe the hype surrounding Bitcoin, half of those investing make less than £500 a month. 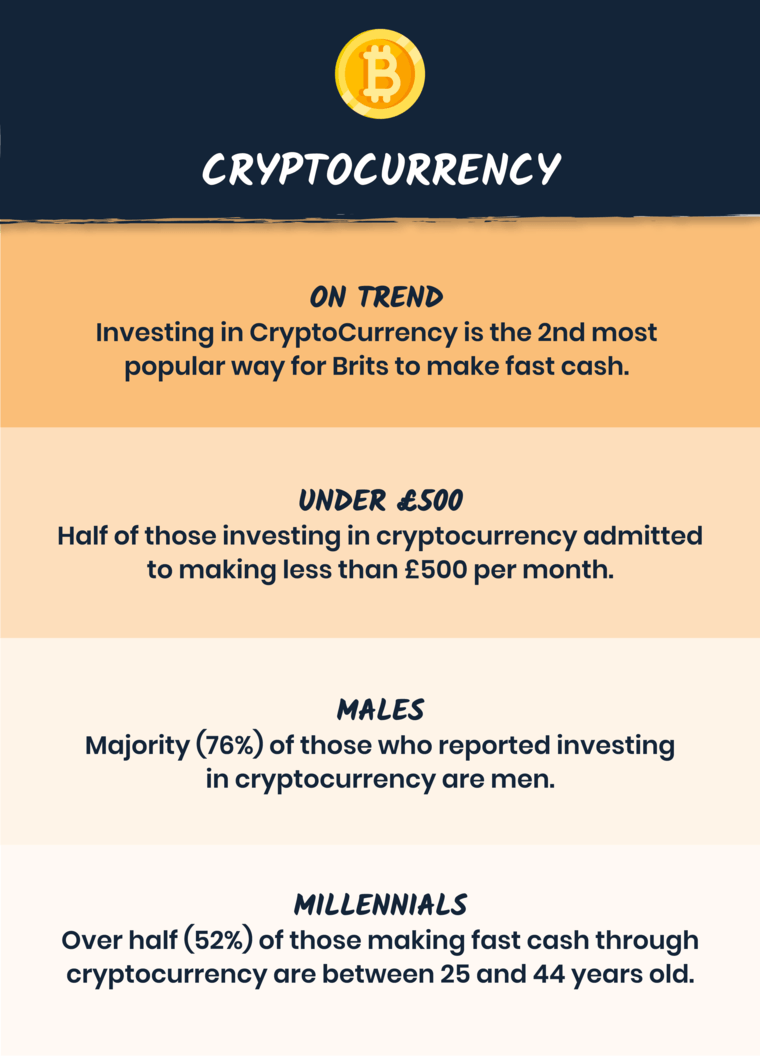 Delivery driving secured the 3rd spot on fast-cash solutions (6%). Again, this was a male-dominated occupation. In fact, there is a 71% chance that the rider popping up on your ‘Uber-Eats’ or ‘Deliveroo’ is male.

Delivery service drivers were also more pessimistic about the job market, with 33% reporting a lack of job opportunities. 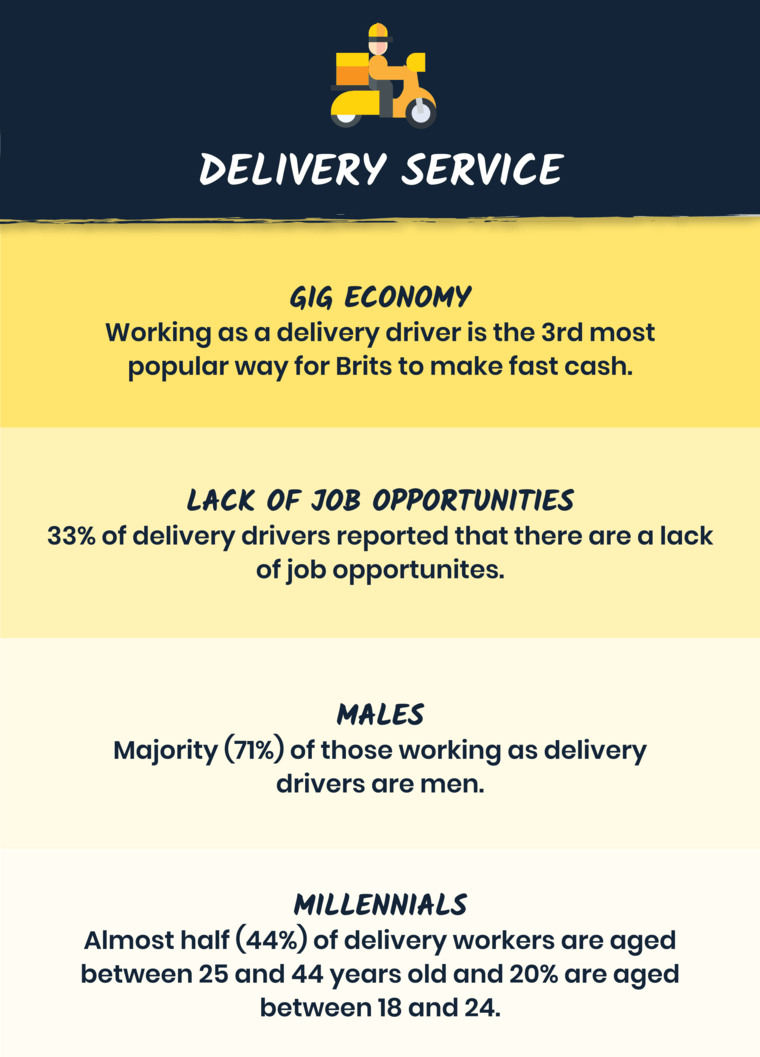 Coming in 4th place is a relative newcomer. Only 6.5% of those surveyed may have admitted to starting an OnlyFans, but this rises to 13% of Hospitality workers and 10% in the Travel and Finance sectors. Perhaps those in the Finance sector are applying their shrewd economic judgement: 30% of those who started an OnlyFans make more than £5000 a month. 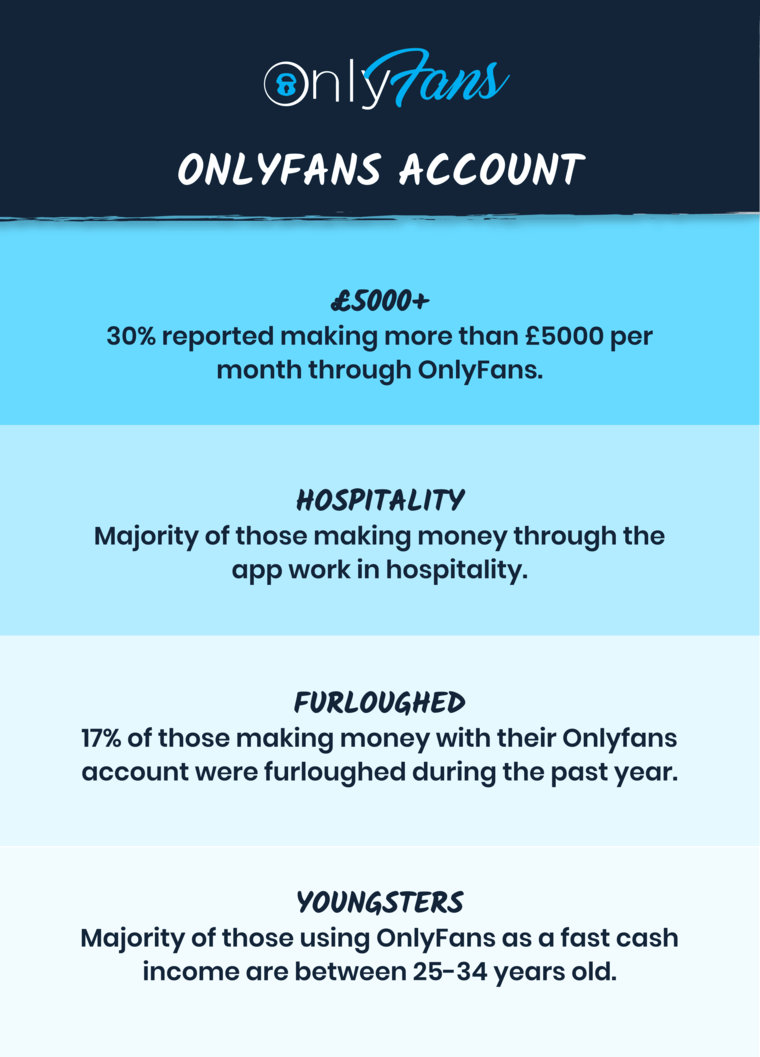 People often turn to fast-cash solutions when life gets tough. Besides taking on an ‘alternative job’, what support systems did struggling Brits turn to this year?

Of those who reported using a support system, 40% turned to Universal Credit, followed by 24% taking out a loan, with 16.5% resorting to Food Banks.

Despite being more likely to answer that they hadn’t needed help, men were more likely than women to have resorted to every support system other than Universal Credit. In fact, 86.5% of those turning to the homelessness charity Shelter, were men. 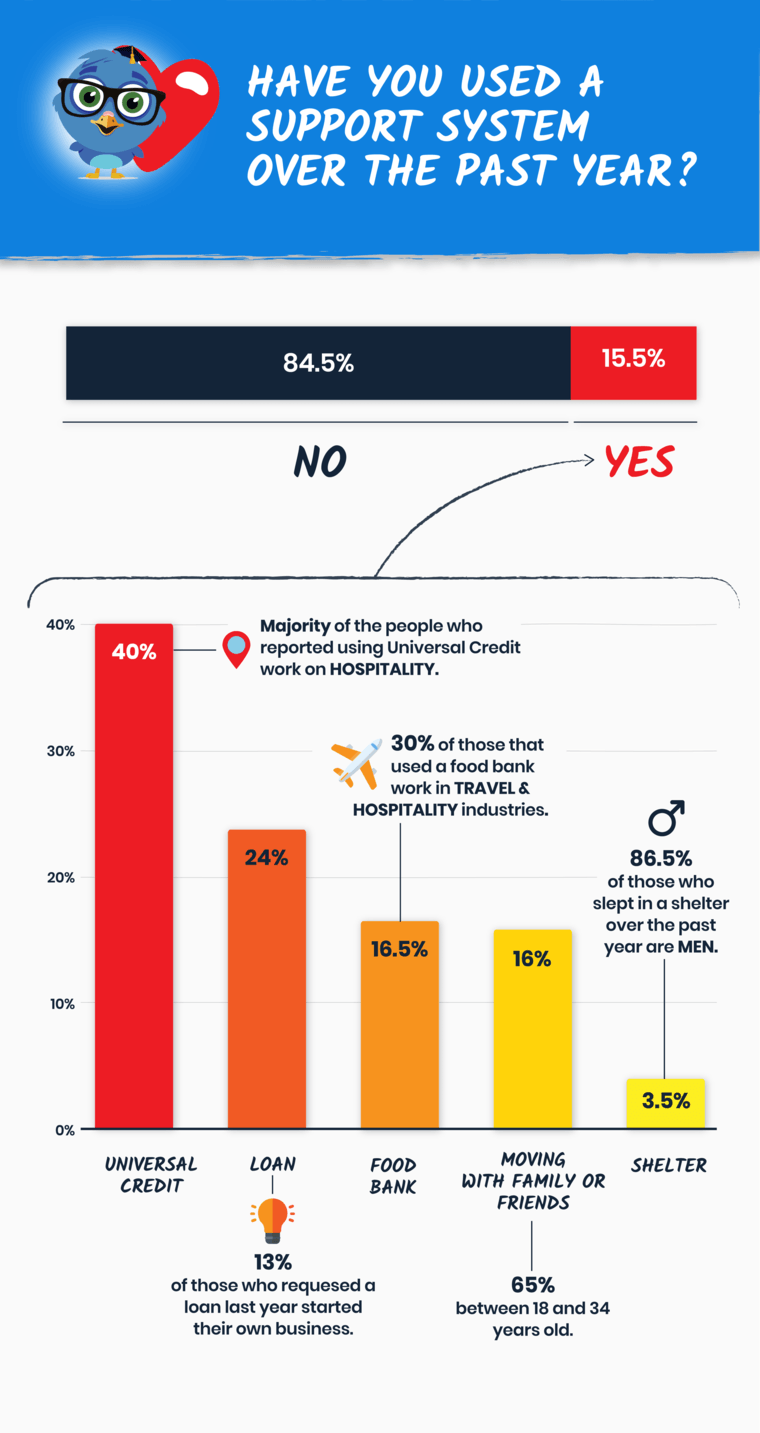 It may be true that pathogens don’t discriminate, but this data clearly shows that the pandemic has disproportionately disadvantaged some groups more than others.

Fast cash solutions may have buoyed many Brits, but with the vast majority of people making less than £500 a month from their ‘alternative jobs’, can it really keep them afloat?  When the Cabinet cuts Universal Credit later this year, perhaps even more Brits will dip their toes into the ‘Dark Economy’.

The data used in this study was collected via the Google Survey platform and conducted over the period of 26th Feb - 2nd March 2021.

We analysed how UK audiences’ economic situation has changed over the past year, posing questions to users that cover changes in job status, fast cash solutions, support systems used and concerns about future job opportunities.

Data points were then averaged and grouped by age group, gender, industry and country.